The Unholy Mix: Cults and Abuse

Cult leader Shai Abramov was founded hanged in his cell on Saturday morning.
Abramov, 40, was suspected of being a cult leader and having encouraged a teacher to starve and beat her young son; Abramov reportedly committed suicide in his prison cell at the Hadarim Prison in the area on Friday night.

He was found by wardens, apparently after hanging himself with a lace taken from a pair of pants. Paramedics tried to resuscitate him without success. Today, Abramov's family have declared that he did not commit suicide, but was the victim of foul play.
The Abramov affair first came to light following the arrest two weeks ago of a teacher from Netanya accused of beating and starving her 10-year-old son. Under questioning, police discovered that the boy was beaten as part of an educational method the mother said she learned from Abramov, a Netanya resident.
Abramov and his wife were arested late last Tuesday night after officers from the central district of the special police investigative unit Yamar received a tip that Abramov was hiding out in ’s lower city.
Abramov was reportedly head of the Ithaca cult, and according to The Israel Center for Cult Victims, the group has all the classic makings of a cult and that “over the past 3-1⁄2 years, over 20 families have come to us to complain about Abramov.”
“We very much believe that this is a cult,” said Rachel, an employee of the center. “First off ,because of the mind control he exerted over the people he dealt with, but also because of the way he professed to have special supernatural powers, something that is very common with cults.”

Readers may recall the arrest earlier this year in of another cult leader, Goel Ratzon, who is alleged to have practiced polygamy and to have abused some of his many children.
Ratzon, who fathered dozens of children from at least 17 women, is suspected of a series of rape, harassment and enslavement offenses committed over a period of more than a decade. 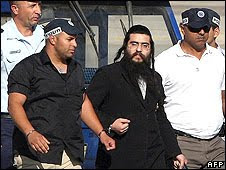 In a third case this year, Elior Chen was extradited from to and has been charged with ordering his followers to beat and psychologically the eight siblings, all children of a mother belonging to his sect. He has been described as being viewed by his adherents as a tzaddik, or righteous leader, to be emulated.
Elior Chen was the spiritual leader of an ultra-Orthodox sect suspected of severe child abuse.
Chen and several of his followers allegedly used knives, hammers and other instruments to abuse children as young as 3 and 4 years old in the town of in February and March 2008.
Also four of Chen’s followers were accused and convicted of 22 charges stemming from 40 instances of child abuse.
At the beginning of May, another one of Chen’s disciples, and the mother of eight of the abused children, was sentenced to five years in prison after pleading guilty to shaking burning and tying up her children.
----
So what is the connection between cults and abuse?
According to Fact.net, a site dedicated to “Discussion, Resources and Support for Recovery from the Abusive Practices of Religions and Cults”:
Parents' involvement in cults can literally destroy a family. Individuals in cults do things willingly under the influence of mind control which they previously may have detested, for the sake of the group's "higher purposes." Reports of members of diverse cults committing illegal and reprehensible activities are widespread. Child abuse in cults is common, and children are often cults' most devastating casualties. Of the 912 People's members who died in in 1978, 276 were children. Of more than 80 who died at , 25 were children. Even children not harmed physically rarely receive formal education or develop correctly on emotional, social, and cognitive levels.
Similarly, young adults who have been recruited into cults can tear a family apart as parents, siblings, and friends struggle to understand and help. Studies report that the majority of cult members are recruited during high school or college years. Preventative steps can be taken by parents as well as schools.
cults Elior Chen Goel Ratzon Shai Abramof Shai Abramov