Showing posts from August, 2012
Show All

Is the Looming War With Iran Getting Personal?

Debka is a news-site, specialising in defence and intelligence issues in Israel and the Middle East. Debka has  a particularly well-informed, bellicose approach. They have published a short video highlighting Iranian leaders' recent calls for Israel's destruction, and proposing that Israel may now get personal. They have packed a powerful punch into the two-and-a-half minute video.
Post a Comment
Read more 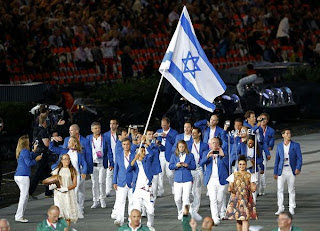 After just a few days, the committee formed by Minister for Sports, Limor Livnat, to examine the reasons behind Israel 's disappointing performance at the Olympics, issued their first findings. No Israeli competitor got even close to a medal this year, and so the National Committee of Enquiry was assembled, composed of a broad spectrum of Israelis. Committee member Danny Zaken, chairman of The National Federation of Israeli Journalists,   said all of Israel's journalists unanimously blame Bibi for the mess-up. Zaken points out that when Netanyahu was Prime Minister for the first time (1996-9),  Israel  also didn't win any Olympic medals. In response, the Prime Minister's spokesman pointed out that Gal Fridman won a bronze medal during the 1996 Olympics in  Atlanta , under Netanyau's Government; Danny Zaken countered that Bibi always uses the absurd and underhanded tactic of using facts to win arguments. Even though this year's most succe
3 comments
Read more

Have you ever been godol-hopping? My brother-in-law Daniel Kestenbaum is currently in Israel. Each time he visits, he makes a point of visting gedolim - torah leaders - in Bnei Braq and Jerusalem. Me and two of my sons (Yonatan and Ariel) joined Daniel for the trip to Bnei Braq one evening this past week. We found our way to building 5, Rehov Chazon Ish. It is a modest, even run-down, block of apartments. Rav Aharon Leib Shteinman lives half a story up. There were two or three people outside, and one of them told us that Rav Shteinman gives a shiur at 7.40pm, on Mishnah Brura. At 7.40pm, we entered the apartment, together with around a dozen other people. The apartment itself was very sparse. Mainly walls of books, and some simple furniture. One room was a beit midrash/shul; there is a small pokey kitchen; and two bedrooms. The shiur took place in Rav Shteinman's bedroom. Rav Shteinman himself was seated on his bed, and was propped up usin
2 comments
Read more
More posts