Showing posts from February, 2014
Show All

Global Response to Child Abuse in the Jewish Community

By Yonatan Schechter February 27, 2014 Beit Shemesh, Israel - On March 3, professionals and lay leaders from around the world will gather in Jerusalem for a historic 3-day conference.  They will be convening for the First International Congress for Child Protection Organizations in the Jewish Community at the Mount Scopus campus of Hebrew University.  The conference will include professors, mental health workers and policy makers who represent an array of governmental authorities and NGOs from all over the globe, with representation expected from organizations in the US, UK, Argentina, South Africa, France, Switzerland and Australia. The purpose of this unprecedented effort is to draw community organizations together to share ideas, resources and information for the sake of improving their capabilities in addressing the scourge of child abuse in their respective communities.  Among the topics planned for discussion are school-based child safety curriculums, Jewish law as i
Post a Comment
Read more 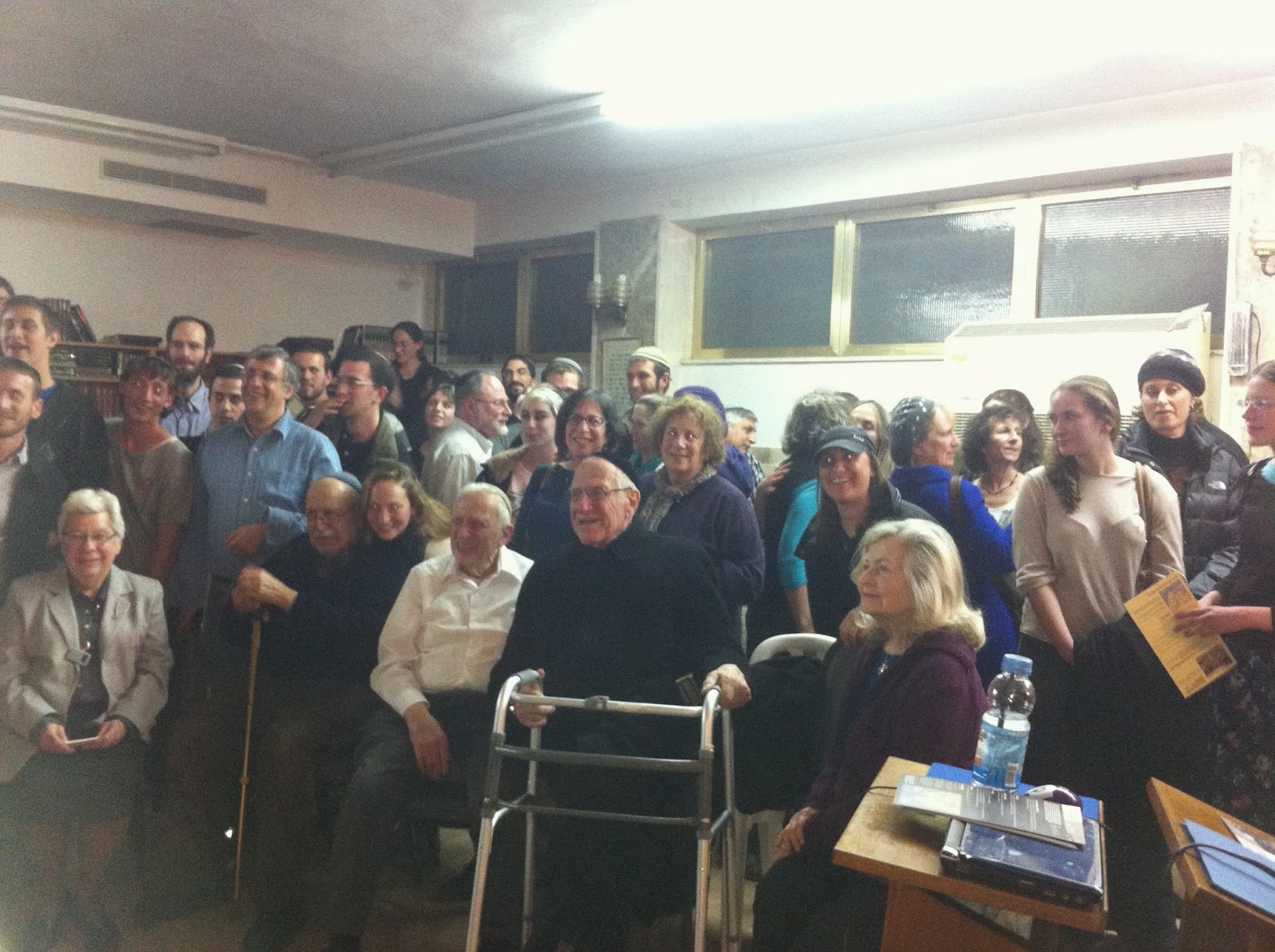 Descendants of Jacob and David Kestenbaum gather at Beit Kenesset Hanasi, Jerusalem   As family re-unions go, this has got to be unique . I had the privilege of attending a presentation at the Beit Kenesset Hanasi in Rechavia, Jerusalem by Bonnie Gurewitsch who is the curator of the exhibition, Against the Odds: American Jews and the Rescue of Europe's Refugees 1933-1941, now on view at the Museum of Jewish Heritage - a living Memorial to the Holocaust, in New York City. Bonnie opened her presentation with an explanation of the astounding obstacle of bureaucracy which stood as a wall between European Jewry, and safe haven in the USA. Strict quotas were in place, which severely restricted the total potential emigration to just tens of thousand each year. Furthermore, these quotas were reinforced and then supplemented with draconian bureaucratic requirements - on the pretext that immigrants should not become a burden on the public purse in the USA. Bonnie observed th
1 comment
Read more

With the chareidi political forces now girding their loins to strongly oppose the proposed new IDF enlistment law, the voice of the middle ground is more important than ever, yet perhaps too soft to be heard at all. TOV ("good")  is a relatively young political party, led by Chanoch Verdiger, the son of the late long-standing MK Avraham Verdiger . TOV claims to represent "working chareidim". A Tov Facebook page states: TOV is the modern successor to Poalei Agudath Yisrael. TOV aims to assist the Haredi community face the social and economic challenges it faces today enabling community members to earn an honorable living, educate their children in excellent school systems while enjoying a good quality of life as other citizens of Israel. TOV stood in five cities for local council in the October 2013 municipal elections - Jerusalem, Beit Shemesh, Beitar, Emanuel and Elad. However, the results were disappointing, as TOV did not succeed to win a seat
Post a Comment
Read more

The Groomer - A Profile of a Child Abuser

February 25, 2014
This was written by the parents of a child who was abused by the local grandfatherly neighbor, who was amazingly friendly to everyone else's children.
Post a Comment
Read more

This Time, The Dead Won't Vote!

The Ministry of the Interior has announced special directives to make sure that the fraud and irregularities of last October's Municipal Elections, will not be repeated at the re-votes taking place in Beit Shemesh and Nazareth. The Jerusalem and Supreme courts ordered new elections in Beit Shemesh and Nazareth, overturning the municipal election result of 20th October 2013, due to "widespread and systematic acts of fraud which was intended to change the election results". Whereas the ballots are usually supervised by local residents and political parties, in the new elections only government employees "professionals with experience in managing the election process, from outside the city" will be used to supervise the balloting process. Furthermore, the Ministry has ordered massive police presence, to ensure that the new elections will be law-abiding. Some of the allegations following the previous elections in Beit Shemesh were regarding the supervisors
6 comments
Read more

Falling Photographer Saved by MK Danon (photo credit: Yaakov Lederman) As if there was not enough drama in the re-called contentious Beit Shemesh municipal elections! During a campaign rally last night for the Zionist Camp mayoral candidate Eli Cohen, photographer Michael Krispal took a step too far backwards, and fell off the stage. Israel's Deputy Defence Minister, MK Danny Danon instantly responded by grabbing the photographer's flaying leg, returning him to the stage and so saving Krispal from a very hard landing. Celebrating the recent court decision to re-run the elections in Beit Shemesh, under the title "We Believed, We Struggled, We Succeeded!", the rally was attended by hundreds of people, including MK's and other dignitaries. Aside from Danon, Minister of Economy & Trade and leader of the Jewish Home faction Naftalli Bennett and Minister of Housing Uri Ariel also spoke in support of Eli Cohen at the gathering. This followed a major ga
12 comments
Read more 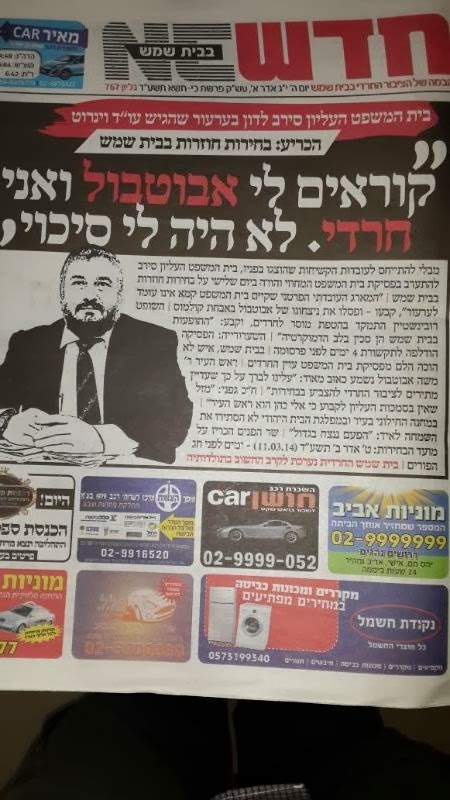 The cliche definition of insanity, as making the same mistakes over and over, while expecting different results, could apply to Moshe Abutbul's response to the High Court decision to instruct new elections in Beit Shemesh. Current mayor Moshe Abutbul responded to the court's decision by stating:   " injustice and theft has been done in the wake of my sweet victory. There was not one Supreme Court ruling in favor of the ultra-Orthodox sector. The court despises the Right and the ultra-Orthodox. People tell me that if my name was not Abutbul the ruling would be different, and it's hard for me to deny that. It is obvious what the public environment is and the judges swept after the media. I hope that a crushing victory in the upcoming elections will be our answer." Within this short response (which Abutbul had four months since the October elections to carefully consider beforehand) he accuses the Supreme Court of injustice, theft, of being hareidi-basher
13 comments
Read more

The Supreme Court has unanimously rejected the appeals by Beit Shemesh Mayor, Moshe Abutbol, and mayoral candidate Meir Balayish - and so municipal elections will be held again in Beit Shemesh on 11th March. In a statement, the three judge court, comprising Supreme Court President Asher D. Grunis, Elyakim Rubinstein, and Uzi Fogelman, announced that:  "The picture which emerges from the District Court Ruling, regarding the manner in which the elections took place in the town of Beit Shemesh, is alarming and disturbing. Residents of the city of Bet Shemesh, and the election process to express their democratic wishes, fell victims to an organized large-scale and systematic violation of law which aimed at diverting the election for mayor and City Council. In light of the extensive scope of the phenomenon, and the systematic organization of those involved, the District Court found that there is a real possibility that this serious conspiracy affected the election results, an
Post a Comment
Read more

EXCLUSIVE Israel's Prime Minister, Benjamin Netanyahu, has issued a series of new demands during the latest round of negotiations with the Palestinian leadership. In a leaked memo, Netanyahu has demanded that the Palestinians must recognize Israel as a legitimate independent State within secure borders, and that both parties agree to a cessation of hostilities. "Unless the Palestinians finally recognize the legitimacy of the State of Israel, and our right to live within secure borders, then we will not be agree to give them their Palestinian State", Netanyahu explains. "Not now, not ever!" Advisers close to the Prime Minister noted that this demand has already been accepted by the Palestinians. Yasser Arafat did this in the exchange of letters between himself, Israel's Prime Minister Yitzhak Rabin and Norwegian Foreign Minister Johan Jorgen Holst on 9th September 1993. Furthermore, due to lingering doubts, this recognition of Israel was endorse
1 comment
Read more
More posts