Showing posts from March, 2013
Show All

March 24, 2013
Benjamin Netanyahu's telephoned apology to Recep Erdogan of Turkey, in respect of the deaths of nine Turkish citizens on the Marmara in 2010, provided a dramatic ending to Barack Obama's visit to Israel. Erdogan has declared this a victory for Turkey's "principled stand" over the past three years. Netanyahu is linking this apparent Israeli back-down to events in Syria. Commentators are referring to Obama pressuring Netanyahu - pointing out that Obama personally spoke first on the phone with Erdogan, and then closed the Netanyahu/Erdogan conversation after the apology was delivered and accepted. In 2009 and 2010,  Erdogan set his nation on a collision course against Israel,with a series of attacks, including the 2009 Davos diatribe against Shimon Peres, Erdogan's vitriolic & hostile rhetoric against Israel - climaxing during the Gaza War in 2010, and saber rattling with threats to set Turkey's navy on Israel's gas exploration rigs around
Post a Comment
Read more

For anyone who missed it, here is Barack Obama's speech in the Jerusalem Conference Center to a young Israeli audience. Overall, he said what the audience wanted to hear. By Obama's very high standards of oratory, I reckoned he scored a "B".
Post a Comment
Read more

National Religious: The Dilemma of Power 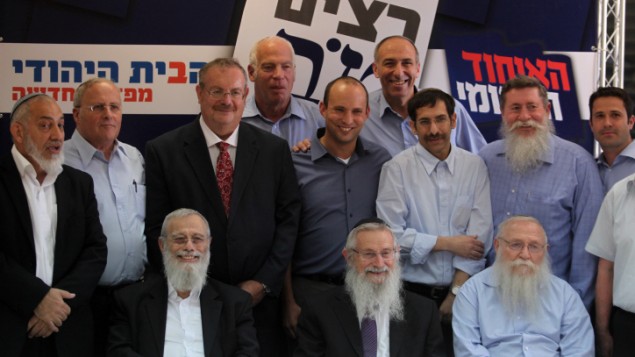 The new government coalition has commentators reaching for their history books. The combination of a strong (nay, critical) National Religious presence, with absent hareidim, does not seem to have a precedent in Israeli history. If one also considers the national religious MK's in Likud (6),  Yesh Atid (3), and HaTnuah (1) - I make it that we're looking at 21 national religious MK's in the ruling coalition. Almost one third of the Government.   If you ask an American - "are Jewish senators/congressmen good for the Jews?" - you'll probably get a mixed review. Yes, it's good for Jews to be represented and to influence policy. But it's not good for the Jews to be to seen to be holding the reins of power. It's sort of an Evil Eye, that the gentiles will use the image of Jewish power as an excuse for antisemitism. In addition, there's a feeling that Jews may go overboard to be seen to be broadminded, and may even act against Jewish in
Post a Comment
Read more

March 13, 2013
I visited New York this week and spent Shabbat as a guest of my wife's cousins Richard and Gloria Kestenbaum. Richard is President of Lincoln Square, probably the leading Modern Orthodox shul in Manhattan, NY. At each meal and in the mingling at shul, everyone was abuzz about an article by David Brooks which had been published in the NY Times . Richard had even printed up multiple copies, which he handed out to those who hadn't read it yet. This article describes the journalist's visit to "Pomegranate" a kosher store, catering to the modern orthodox community. Brooks reports how impressed he was with the cultural and religious gravitas of simple purchases made at the store. Buying food items with hechsherim. "Gluten free ritual foods" and a product for cleaning dishes without 'squeezing' on Shabbat were highlighted. The article also discusses the relatively young age people marry (71% by the age of 29 – which is only 20% in the w
1 comment
Read more
More posts