Showing posts from January, 2010
Show All

Preparing for The Great Expulsion

We have recently witnessed the eviction of Rav Eliezer Melamed's Har Bracha Yeshiva from the Army "Hesder" Program; the arrest two days ago of Rav Yitzhak Shapira, Rosh Yeshiva of "Od Yosef Chai "; and the appointment today of Rabbi Rafi Peretz as the new Chief Chaplain of the IDF. They all point to a concerted campaign, which is now underway. Rav Melamed was alleged to have supported soldiers who demonstrated against the eviction of Jews from their homes by the Army, and the rabbi was also accused of supporting the right of soldiers to refuse orders in a case of such evictions. The punishment for these 'offenses' was termination by the army (by instruction of Minister of Defence Ehud Barak) of the yeshiva's funding and its delisting as a Hesder Yeshiva – for which there is no precedent in over 50 years of the Hesder program. Rabbi Yitzhak Shapira of the Od Yoseph Chai Yeshiva in Yitzhar was arrested on suspicion that he knew about an alleged
Post a Comment
Read more

A Smart Man Once Said...

January 27, 2010
"There are many ways to repay a favor. The cheapest of which, is with money." (Told to me by my brother-in-law Rabbi Dovid Kestenbaum of Manchester; I forget in whose name he quoted it..).
1 comment
Read more

[David Morris: I was approached by an adult survivor of child sex-abuse, and asked if I would be willing to publish this. I considered not publishing, because the imagery is so shocking, particularly to the Jewish orthodox sensitivities I share. On reflection, I think the lesson of this piece is that, in the same way a victim's anger must be directed (solely) to the perpetrator and his enablers, so our shock must be directed solely to the violation, and not to the healing process]  SURVIVING and HEALING From childhood sexual abuse Part one Anger is an important part of healing.    Survivors of childhood sexual abuse blame themselves for what happened.    This belief causes a tremendous amount of shame and is one of the reasons why they often never disclose the abuse.    The following piece may shock the reader.    The visualization exercise of going back in time to the place where the abuse happened and placing the anger and responsibility for the abuse squarely onto the
7 comments
Read more

January 15, 2010
You'll excuse the comparison, because the alleged crimes are very different, but the inability of the international legal system in over twenty years to bring Abraham Mondrowitz to justice, reminds me of the failure to bring John Demjanjuk to justice. In both cases, the international legal system, involving extraditions (Israel, USA) and the abject failures of courts on both sides of the Atlantic to deliver justice, have only delivered humiliation for all those who fight for a victim's right to see justice done, and to have the chance to attempt closure, even decades later. According to The Awareness Center's file on Mondrowitz , he was born in Tel Aviv in 1947 and later moved with his family to Chicago . He is the son of a prominent rabbi.  In the late 1970's Mondrowitz moved to Brooklyn , NY and in the late 1970s presented himself to Orthodox educational institutions as a rabbi and clinical psychologist. While in New York Mondrowitz provided psychological trea
1 comment
Read more

Jewish Press - Saving Our Children From Abuse, by David Morris

OP-ED SAVING OUR CHILDREN FROM ABUSE More Articles By David Morris David Morris  Posted Jan 13 2010 In separate incidents on the same night two weeks ago, two children in Israel were murdered by adults.   A seven-year-old boy in the town of Bnei Ayish was found dead under a bed and a Jerusalem resident allegedly murdered his baby daughter by smashing her head repeatedly on the floor following an argument with his wife. Reportedly, members of their chassidic community were aware the father was a risk but said this was being "managed" within the community.   Meanwhile, in the U.S., as Rabbi Yakov Horowitz and Dr. Benzion Twerski noted in a Jewish Press op-ed article ("Abuse Survivors: Please Don't Suffer Alone," Nov. 27), "the recent tragic passing of yet another young person in [Brooklyn] may have stemmed at least in part from the trauma of childhood abuse ."   For those who may still have harbored any doubt, child abuse - both in Israel and in the
Post a Comment
Read more 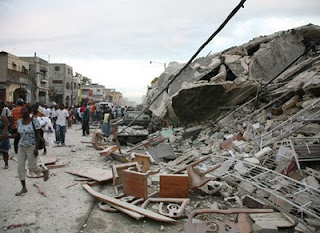 Our thoughts and prayers are with the people of Haiti at their time of catatrophic and tragic loss.
Post a Comment
Read more

Israel has very, very few strategic friends . In the United Nations, for example, just three countries reliably vote against anti-Israel motions: Israel , United States and (believe it or not) Micronesia . Against this background, Turkey became a strategic ally to Israel in the late 1990’s, resulting in a Free Trade Agreement in 2000 (Israel now exports an annual $1.5 billion in goods and services to Turkey, and imports more than $1 billion); large Turkish Ministry of Defence contracts for Israeli products, with joint military exercises; and Turkey’s key diplomatic role in Israel/Syrian negotiations By 2008, Turkey was the single most popular foreign destination for Israeli tourists, representing 13% of all departures and generating an estimated $300 million in annual revenues. About 70% of these travelers headed for the resorts around Antalya . This idyllic relationship seemed to also weather the change in Government in Turkey , in March 2003, from the secular DSP-MHP-ANAP
2 comments
Read more

There were two horrific and tragic cases of child-murders this past Thursday night. 7 year old   Leon Kalantarov z"l of the town of Bnei Ayish, was found dead in the nearby apartment of Naor and Adir Sodmi, 24 year old twins, both accused in the past of pedophilia. Meantime, A 23-year-old Jerusalem resident, Nachman Anshin, has been arrested for murdering his own baby daughter, Fruma, Thursday night following an argument with his wife. It is reported that members of their community were aware that Anshin was a risk, and this was being "managed" within his own community. Today, both President Peres and Prime Minister Netanyahu have called for a more effective system for protecting Israel ’s children. Minister of Welfare, Yitzhak Herzog (who I have met with twice in the past few months) has told reporters that there are a staggering 35,000 cases of child abuse reported to the Ministry each year. In both cases, the lawyers and families of the accused are claimin
4 comments
Read more

January 03, 2010
Welcome to the January 3, 2010 edition of haveil havalim! Founded by  Soccer Dad , Haveil Havalim is a carnival of Jewish blogs -- a weekly collection of Jewish & Israeli blog highlights, tidbits and points of interest collected from blogs all around the world. It's hosted by different bloggers each week and coordinated by  Jack . The term 'Haveil Havalim,' which means "Vanity of Vanities," is from Qoheleth, (Ecclesiastes) which was written by King Solomon. King Solomon built the Holy Temple in Jerusalem and later on got all bogged down in materialism and other 'excesses' and realized that it was nothing but 'hevel,' or in English, 'vanity.' Leah Aharoni presents The Leib Tropper Affair and the Divine Justice posted at Ingathered . Leah views the Tropper scandal specifically in light of Tropper's campaign against Rabbi Drukman - which resulted in R.Drukman's unjust dismissal from his position, and disaster for the man
10 comments
Read more

Israel was shaken awake this morning by the horrific news that, in separate incidents, two young children were killed by adults. According to Haaretz: The body of a seven-year-old boy, Leon Kalantarov, who was reported missing since Thursday, was found before dawn Friday in the town of Bnei Ayish, just south of Rehovot.   Twin brothers in their early 20s were arrested for allegedly sexually assaulting the boy before strangling him to death.   Meanwhile in the Jerusalem neighborhood of Shmuel Hanavi, 23 year old Nachman Anshin reportedly strangled his 8 month old baby during an argument with his wife. In both cases, it is reported that their communities were previously aware of the dangers posed by these three alleged child-murderers, and in the Bnei Ayish case, had reported their earlier concerns to the police. These two tragedies are too fresh and shocking for me to offer any analysis at this time. Today, Am Yisrael grieves for these murdered children.
1 comment
Read more
More posts