has very, very few strategic friends. In the United Nations, for example, just three countries reliably vote against anti-Israel motions: , and (believe it or not) .

Against this background, Turkey became a strategic ally to Israel in the late 1990’s, resulting in a Free Trade Agreement in 2000 (Israel now exports an annual $1.5 billion in goods and services to Turkey, and imports more than $1 billion); large Turkish Ministry of Defence contracts for Israeli products, with joint military exercises; and Turkey’s key diplomatic role in Israel/Syrian negotiations

By 2008, was the single most popular foreign destination for Israeli tourists, representing 13% of all departures and generating an estimated $300 million in annual revenues. About 70% of these travelers headed for the resorts around .

This idyllic relationship seemed to also weather the change in Government in , in March 2003, from the secular DSP-MHP-ANAP coalition led by Bulent Ecevit, to the Islamist AKP party under Recep Tayyip Erdoğan.

However, the war in 2008/9 between and the Hamas in ostensibly put the relationship into a dramatic nose-dive. 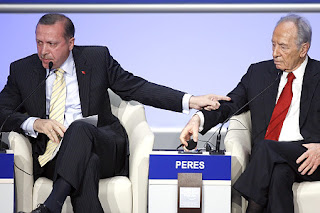 Public and outspoken criticism by Erdogan included pronouncements that was guilty of war crimes, and Erdogan’s dramatic, televised walk out of his debate with ’s octogenarian President Shimon Peres at the Davos conference in in February 2009.

Since then, Erdogan has not let up, including calling Israel “a threat to world security”, during a meeting this week with Lebanese President Hariri, who was accompanied by his new Minister for Agriculture, Hussein Al-Hajj of Hizballah (now a part of the Lebanese Governing coalition).

The hostility has also reached popular culture in , with the recent launch of two vitriolic and inciting TV series, casting the IDF (in one) and Mossad (in the other) as cold-blooded satanic child-murderers.

In October 2009 a high-profile military exercise, together with , and the was cancelled by due to ’s participation.

In parallel to the concerted destruction of good relations with , has been about-turning their relationship with historically ‘problematic’ neighbors , , , and the Armenians, a foreign policy dubbed as “zero problems with neighbors”.

Syrian president Assad visited , and Erdogan visited Iranian President Ahmedinijad in , in the past months, signing dozens of both commercial and strategic defence agreements.

Throughout all this, the Israeli Foreign Office has reacted in way which can only be described as stunned silence. Even Shimon Peres absurdly recently described relations as “absolutely perfect” between and . 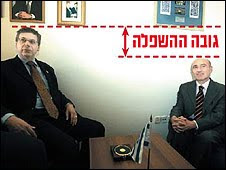 This week Liberman's deputy Foreign Minister and Yisrael Beteinu party colleague, Danny Ayalon, called in Oguz Celikkol, Turkey’s ambassador to Israel, and delivered both a scathing verbal complaint about the latest anti-Semitic/anti-Israeli TV show, and also stage-managed the meeting to give non-verbal signals of displeasure – such as high vs low seating, lack of a Turkish flag on the table, keeping the Ambassador waiting some minutes in the corridor, etc.

Danny Ayalon has been roundly criticized in the Israeli Press for the theatrical side of the dressing down, which reportedly exceeded normal diplomatic protocols. If this is true, then Ayalon surely knew it, as he was ’s Ambassador to the between 2000-2006.

’s diplomatic response to the deliberate campaign of destruction of the previously excellent relations between and , fully orchestrated by Turkish Prime Minister Erdogan over the previous 12 months, is the equivalent of the beaten wife, who cannot absorb the reality of her husband’s abusiveness and hatred.

Regretfully, repeatedly seeking “shalom bayit” (domestic peace), when only one party wants it, is not a rational policy, but dangerous delusion.

is not ’s wet rag (smartut) – and we will not regain ’s respect by adopting that role.