Gedaliah has married into rabbinical aristocracy.

Devori is the daughter of  Rabbi Yitzchak Zev Soloveitchik, and the grand-daughter of Rabbi Meshulam Dovid (Reb Dovid) Soloveitchik, who is Rosh Yeshiva of Yeshivat Brisk (one of the two) in .

(So all this makes me a very distant relative of my rav!).

Devori is also the grand-daughter of Rabbi Boruch Dov Povarski, a Rosh Yeshiva at Ponevezh Yeshiva in Bnei Braq. 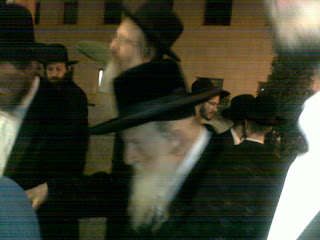 I thoroughly enjoyed the festivities including Shabbat 7-Brachot in the Brisk Yeshiva.

The Soloveitchik side were remarkably high spirited (actually the Povarski's), including setting the tone at the Shabbat meals by standing on their chairs, clapping enthusiastically and leading the singing.

All proceedings and speeches were in Yiddish, and my nephews helped me out with simultaneous translation/explanation.

The Soloveitchiks are well known for their halachik stringencies (some of which they consider a family minhag, and do not impose upon others).

Here's a few I spotted during the proceedings:

1. The Soloveitchik's sport 'bushy' peot. (Accentuated sidelocks, which are generally associated with hasidim - but which the Soloveitchik's grow outwards, rather than downwards);
2. I saw some removing their tzitziot (four cornered undergarment with fringes) on shabbat, before heading from the yeshiva to the street. This is based on a double whammy - the Soloveichiks don't hold by eruvim, and they hold that the tziztiot are not a beged - so they can't 'carry' tzitziot in the rishut harabim/public areas.
3. Kriat Shema in the Brisk Yeshiva Beis Medrash was begun with elongated first sentence (perhaps lasting one minute) including previously unheard (by me) sounds for the various vowels and consonants; the rest of the shema was meticulously recited, lasting several times the 'regular' length.
4. Hechsherim - only bedatz eida chareidis was acceptable. (In one family sheva brachos a bottle of soda with, woops, another mehadrin hechsher, was placed on the table and was rejected).
5. The chupa had no microphone/loud speakers - due to concerns of people saying amen to an electronically relayed bracha.
6. The music at the wedding consisted of solely vocals and a drum-set. This is due to remembering the churban beit hamikdash. This is a minhag yerushalaim, but I never recall having seen it before.
7. The chicken - we had been informed that the Soloveitchiks shecht their own chickens, rather than rely on others. Imagine the disappointment when the sole option on the wedding menu was beef... 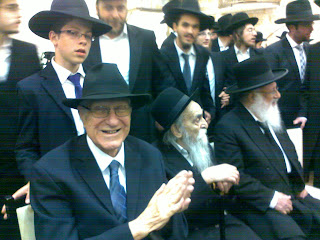 My father in law Rav Ephraim Kestenbaum (pictured above, with Reb Dovid Soloveitchik and Rabbi Povarski), zeide/grandfather of the groom, was given kavod, sitting alongside the luminaries on the top table, at the dancing and throughout the proceedings.

However, overall I guess the Kestenbaum side were somewhat in the role of the Middletons at the Prince William wedding. (I was fine with that!) 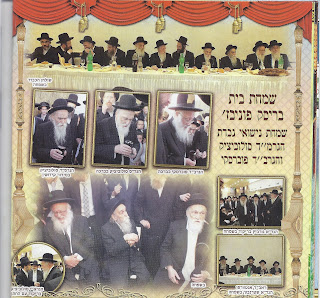 This is borne out by the photos in "Kol HaOlam Kulo" (above) which seems to have been edited to show the top table at the wedding, bereft of any sight or mention of Kestenbaums!

Mazaltov to the young couple, Gedaliah and Devori Kestenbaum (yeh!!) – wishing you every mazal and bracha and many many years of happiness and success!!