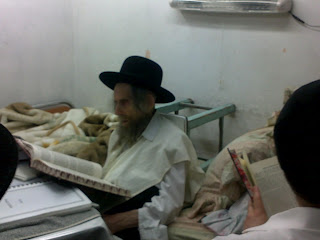 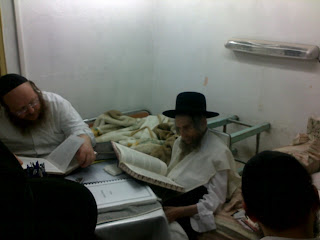 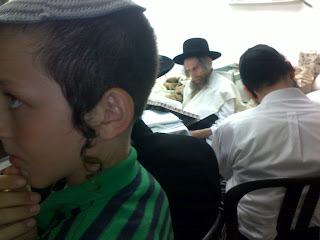 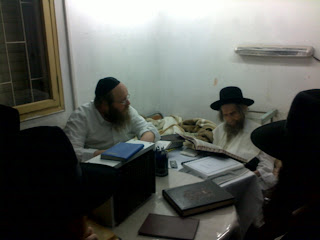 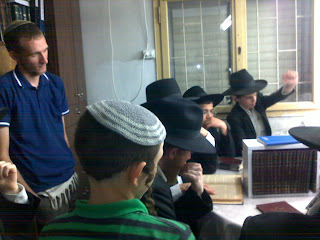 Have you ever been godol-hopping?

My brother-in-law Daniel Kestenbaum is currently in Israel. Each time he visits, he makes a point of visting gedolim - torah leaders - in Bnei Braq and Jerusalem.

Me and two of my sons (Yonatan and Ariel) joined Daniel for the trip to Bnei Braq one evening this past week.

We found our way to building 5, Rehov Chazon Ish. It is a modest, even run-down, block of apartments. Rav Aharon Leib Shteinman lives half a story up.

There were two or three people outside, and one of them told us that Rav Shteinman gives a shiur at 7.40pm, on Mishnah Brura.

At 7.40pm, we entered the apartment, together with around a dozen other people.

The apartment itself was very sparse. Mainly walls of books, and some simple furniture.

One room was a beit midrash/shul; there is a small pokey kitchen; and two bedrooms.

Rav Shteinman himself was seated on his bed, and was propped up using an upturned wooden stool.

The Rav looked exceptionally old - which, at the age of 100, is reasonable enough.

Before the shiur there was an opportunity to speak with the Rav, which I did.

I briefly told Rav Shteinman about Lema'an Achai and Magen and asked for the Rav's bracha for these organizations."Bracha vehatzlacha", he said. I also asked him for a bracha for Amitai Yakov ben Bracha (Moses) which he gave.

Then the shiur started.

Actually, Rav Shteinman himself didn't give the shiur, but a shamash (assistant) read from the Mishna Brura, on the subject of the tefilot for Rosh Hashana. From time to time the shamash would stop and ask the Rav a question; other attendees also asked or discussed various items which came up in the shiur.

Rav Shteinman often closed his eyes for a minute or two - however, he wasn't asleep, as he would respond to what was going on around him.

He also chuckled occasionally, and clearly enjoyed a sense of humour.

I didn't understand most of the shiur itself, and nor could I hear the rav himself when he spoke, as he spoke very softly. There was much discussion about the aramaic language, and whether prayer is aceptable in aramaic.

After the shiur was over, we joined the 8pm maariv minyan of around 50 people in the other room.

After mariv, the rav sat in the front corner and a line of people received brachos and eitzos/advice.

We filed out, and headed off for our next godol.

Rav Chaim Kanievski lives on Rehov Rashbam, about a ten minute drive from R.Chazon Ish, or half an hour if you get lost, like we did.

As luck would have it, Rav Chaim (as he is known) was taking vacation  for a couple of days. Not to the Spanish Rivierra, or even to Eilat, but to his relative's apartment one building away.

We found the apartment, with "Kanievski" on the door, but couldn't gather up the chutzpa to knock and disturb the rav's "nofesh".

Somewhat disappointed, we headed back to the car and to Beit Shemesh. 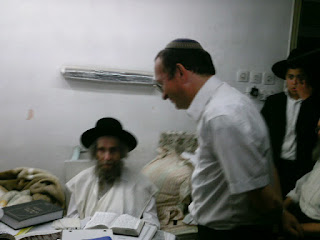