Showing posts from July, 2012
Show All

July 29, 2012
"Unsettled" is a full length documentary movie (in English) about the Gush Katif evacuation/disengagement/expulsion. It portrays many angles on the dramatic and traumatic evacuation process and many of the background issues and history. It does not answer the ultimate question: "Eicha?" Why? The violation, division, destruction and trauma of the disengagement, seems merely served to install Hamas in control of Gaza. (Hat-tip: Life In Israel)
1 comment
Read more

This year, Tisha B'Av falls on the 10th Av, directly coinciding with the 7th anniversary of the expulsion from Gush Katif, and the tragic destruction of the communities, homes and businesses of 9000 Jews. Watch and weep, as the thousand girls daven for salvation in the last devastating moments of the shul in Neve Dekalim. (Music warning if you're watching this on Tisha Ba'Av). (Another music warning)   Although the rest of the world has long ago moved on and forgotten, the trauma of Gush Katif remains, and the daily pain of many who still remain without permanent housing, or reasonable compensation for their suffering and losses. And where are they today...?
2 comments
Read more

By Rabbi Dov Lipman 1)CONSTRUCTION UPDATE The appeal regarding RBS Gimmel 2 was denied after the board insisted on a number of changes which will take time to make to the plans.  We managed to delay any progress on this neighborhood with its current plans for a year and four months which is a remarkable achievement.  There is no possibility of the neighborhood being populated before the next municipal elections which was certainly the Mayor's goal.  We plan to be on guard throughout the marketing progress and will challenge any legal flaws we see - and there are llely to be many.  That may enable us to make changes in the plans themselves after the next elections   We are also on guard for the moment we can begin objections to plans for neighborhoods in RBS dalet. 2)CITY LOANS The city council approved 14 million shekel in loans this week.  The first loan is for 5 million shekel to cover the municipality moving offices to the new mall in Migdal Hamayim and the first ye
Post a Comment
Read more 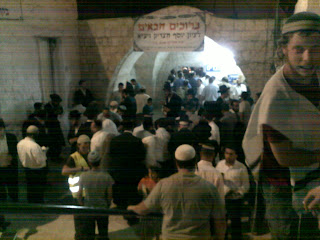 Most of us associate Joseph's Tomb in Shechem with Palestinian/Israeli strife; this was the location of the murder of several Israeli soldiers & civilians and of  infamous and murderous Palestinian rioters who burned and ransacked the building of the tomb. A few weeks ago, following the lead of some of our kids, my wife and I decided to visit Joseph's Tomb in Shechem/Nablus. There are now scheduled monthly visits, organized together with the security forces, for the general public to pray at the Tomb. We booked ourselves seats on a bus from Jerusalem with the organizers, and we were called back by a polite lady to confirm we had been approved for the visit, and allocated three seats. Midnight at Binyanei HaUma in Jerusalem . Return-by time was left 'undefined'. The folks who turned up at our bus were mainly national religious with a scattering of chareidim. Average age around 30. The armored bus took about an hour to arrive at the ma
2 comments
Read more 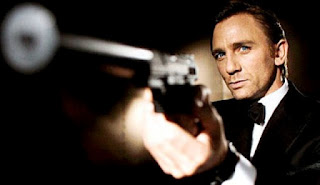 The assassination in Syria on Wednesday of Assad's powerful brother-in-law, his defense minister, t he Head of the National Security intelligence agency, a nd a top general, together with severely wounding the interior minister – shows a dramatic turn in the rebels struggle. The public image of the Syrian rebels as under-armed civilians facing off against a formidable & ruthless national army, and being massacred daily by helicopter gun-ships, tanks and artillery, now looks out-of-sync with the facts on the ground. It is awesome to consider the level of sophistication required to pull off such an ambitious assassination plot. These top government and military leaders were assembled together in Damascus' most secure facility, in a time of civil war, when every security precaution for their personal safety must have been taken. No-one knows what the plot was, and how it was so effectively implemented. Some have proposed the assassin was a treacherous body
1 comment
Read more

US agrees, settlements are “not illegal”

I found this analytic article helpful in comparing the new Levy Committee Report on the legalities of settlements in Yehudah & Shomron, with the US approach. It is published here with kind permission of the author, Ted Belman. Ted Belman, Israpundit The  legal tsunami gathering strength in  Israel will soon  engulf the world.  A report is soon to be released that says, the Fourth Geneva Convention (FGC) does not apply to Judea and Samaria aka West Bank and that Israel has every right to build settlements there. In January of this year,  PM Netanyahu set up the Levy Committee to investigate the legal status of unauthorized  West Bank  Jewish building.  The Committee was headed by Supreme Court Justice (ret) Edmund Levy. It included Tel Aviv District Court Judge (Ret.) Tehiya Shapira and Dr. Alan Baker an international law expert, who was part of the team that devised the  Oslo Accords , The Committee reviewed legal briefs from right of center groups but also from far l
Post a Comment
Read more

Olmert vs State of Israel

In a remarkable turn-around this week, Ehud Olmert was transformed from probably Israel 's most disgraced & corrupt politician, to becoming a righteous victim of injustice, of political conspiracy and of a corrupt legal system. In a surprise verdict on Tuesday, the three man court found Ehud Olmert "Not Guilty" of the  two most serious criminal charges against him. The backlash from the sentence was dramatic, with the full fury of the popular press immediately turned on the prosecution services, with a chorus of calls for State Attorney Moshe Lador to resign. Others blamed for the miscarriage of justice include American right wing Jews. There is no doubt that the toppling of a sitting prime minister, on trumped up charges, would be a huge scandal, and would bring shame upon the State legal system. If the charges were clearly false, then, yes, heads should roll. As usual, the truth is somewhere in the middle. Police forces, prosecutio
1 comment
Read more

Latma's talented team bring us a story, with a surprising and moving punchline.
Post a Comment
Read more

What’s The Difference between Stuxnet & Flame?

There have been two major reported cyber attacks on Iranian assets in the past couple of years, by viruses (or malware) called Stuxnet and Flames. These have some similarities to each other, and some important differences. For those who are interested in such topics, this is the line-up: Similarities: both Stuxnet and Flame attacked thousands of computers, the overwhelming majority within Iran . They were both distributed by removeable media and by local networks. There is also apparently some common code used for modules within these two viruses, for example the module which exploits a weakness in a printing routine. Differences : Stuxnet is an attack malware – which rendered thousand of computer controlled nuclear enrichment centrifuges useless. Flame, on the other hand, is designed to collect and relay intelligence data – it’s a massive spying device. Flame did not solely target the nuclear facilities, but also thousand of computers in Iranian in
Post a Comment
Read more
More posts