Olmert vs State of Israel 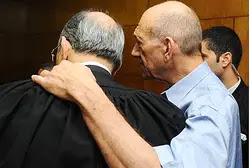 In a remarkable turn-around this week, Ehud Olmert was transformed from probably 's most disgraced & corrupt politician, to becoming a righteous victim of injustice, of political conspiracy and of a corrupt legal system.

In a surprise verdict on Tuesday, the three man court found Ehud Olmert "Not Guilty" of the  two most serious criminal charges against him.

The backlash from the sentence was dramatic, with the full fury of the popular press immediately turned on the prosecution services, with a chorus of calls for State Attorney Moshe Lador to resign.

Others blamed for the miscarriage of justice include American right wing Jews.

There is no doubt that the toppling of a sitting prime minister, on trumped up charges, would be a huge scandal, and would bring shame upon the State legal system. If the charges were clearly false, then, yes, heads should roll.

As usual, the truth is somewhere in the middle.

Police forces, prosecution services and courts are universally accused of being too tough on the innocent, or being too lenient on the guilty.

That's simply in the nature of the work they do, all over the world, in every society.

Indeed, this past January, the Chief Comptrollers Office published a scathing report on the police performance in , and concluded that:
The comptroller criticized the conduct of the police regarding almost all criteria used in the investigation. This included findings that the police broke the law in closing cases...

In other words – that the police department are letting too many guilty people walk free.
The prosecution in the Olmert case have not been blamed for failing to get-their-man– but rather for investigating, charging and prosecuting Olmert in the first place.

Such an allegation would need to show that the police and prosecution had pushed the case forward, motivated by factors beyond seeking justice, and in spite of them knowing the allegations were false.

It is important to appreciate the varying criteria used for each step of the criminal system. As a whole, the system is designed to weed out cases which will not obtain a conviction, as early in the process as possible – while focusing limited police and judiciary resources on the cases which are evidentially the strongest.

1. The police are required to investigate all allegations which there is a reasonable basis to suspect that a crime has been committed and which are in the public interest to pursue.

2. Charges are brought when in the prosecution's judgment there are sufficient evidential grounds to obtain a conviction.

3. The court itself must establish that a crime was committed "beyond all reasonable doubt". In statistical terms I believe this requires "90% certainty that the accused party is guilty as charged".

In the case of Olmert, it seems self-evident that the criteria for the police investigating the allegations were met. We all heard about Talanksy's envelopes of cash, the "Rishon Tours" double-billing scam, and the hiring of cronies at the Ministry of Trade & Industry.

If the police had said there were no grounds to investigate these allegation, or that they were not in the public interest (!!) – the press and watchdogs would have been in arms about a police cover-up of senior politicians.

The decision to bring charges also seems to have been reasonable.

In all the excitement, it has been overlooked that the court concluded there WERE crimes committed with Talansky cash and with scamming the Rishon Tours travel costs.

The court concluded that these crimes were committed by Shula Zaken, but there was insufficient evidence to convict Olmert.

I therefore conclude (from published reports) that, yes, there is plenty of egg on their public face, but actually the police and prosecution did a reasonable job, as defined by the system under which they operate.