A Grave and Burning Issue 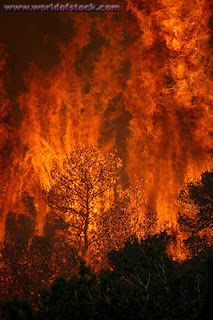 As I headed off to synagogue this past Friday evening, there was a strong smell of woody fire in the air.
My brother, who drove to Ramat Bet Shemesh shortly before Shabbat, told me he had seen flames in the forest on the way into town.
Both Ynet and the Jerusalem Post  reported last week that firemen in Bet Shemesh had blamed three forest fires in the Ramat Bet Shemesh area, on ultra-orthodox demonstrators. Indeed according to these reports:
“the haredim started the fires as an act of protest against the relocation of ancient graves in . The firefighters said they had to ward off haredim who were trying to disrupt the efforts to contain the blazes.”
I haven’t yet seen reports that these fires continued, or were new fires, on Friday afternoon.
I am appalled that anyone would deliberately start a forest fire.
Such an act risks the lives of those who live nearby, or folks who could be caught in the fire, and of the firemen who are required to put out these fires. Furthermore the wanton destruction of forestry and the wildlife there, is to destroy a rare & precious natural resource in our small country.
I am even more shocked at the substantive rumor that the fires were started by frum/orthodox Jews, as a means of registering their protest against the moving of ancient graves to make way for the building of an underground emergency wing to the Barzilai hospital.
Kavod lemeit – dignity of the dead – is a major tenant in Judaism, and the moving of any corpse, particularly a Jewish one, causes tremendous anguish to both the living and, we understand, to the souls of the departed. 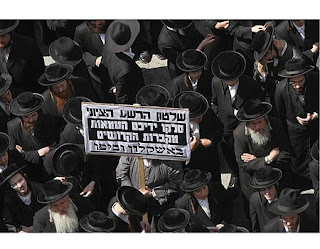 Some ultra-orthodox elements do not trust the Israeli Government regarding kevod lemeit (or indeed much else, for that matter) – and claim that the Government is desecrating Jewish graves for trivial purposes.
However, the argument that the State does not care less about kevod hameit, is groundless.
The Israeli army, under direction of the Government, will even risk soldiers’ lives in order to retrieve a fallen soldier for respectful burial in . The Israeli Government is fully cognizant of Kavod Lemeit, and  plenty of (mainly secular) Israeli soldiers are even willing to put their lives on the line for this sacred principle.
The need for a hospital emergency unit in Ashkelon, which will be sufficiently protected to enable it to continue functioning in a war (and to treat all the wounded they would need to tend to in those circumstances), has been obvious and urgent since Israel’s retreat from Gaza in 2006, the subsequent Hamas coup in Gaza City, and the firing of thousands of missiles from Gaza into the South of Israel, including Ashkelon, in 2008/9.
The final balance between the need to give respect to the dead, on the one hand, while meeting the needs of the living, on the other, is delicate.
In the State of Israel, the responsibility for this decision is in the hands of the Chief Rabbinate.
The Chief Rabbinate decided in favour of moving the bones, as these bones are almost certainly pagan and, in any case, the hospital is a clear case of public need, and even pikuach nefesh (saving of lives).
Deputy Health Minister Litzman’s refusal to be bound by the Chief Rabbinate, and his obeisance to the views of external rabbonim, was highly troubling. There is no formal role in the Government for ‘private’ rabbonim, however knowledgeable and prestigious.
Following that decision by the Chief Rabbinate, and Netanyahu’s approval (he’s formally the Minister of Health – as, for some bizarre reason, United Torah Judaism is unwilling to ever be a Minister in any Israeli Government), the Cabinet instructed the removal of the ancient bones last week.
Deputy-Minister Litzman’s refusal to approve the decision, and the extremists protests, reportedly including the burning down of our local forests, merely promotes a stereotypical (and misrepresentative) image of all of us frum/orthodox Jews, as being more concerned about ancient bones, than the lives of living Jews.
barzilai hospital chareidim protests ramat beit shemesh