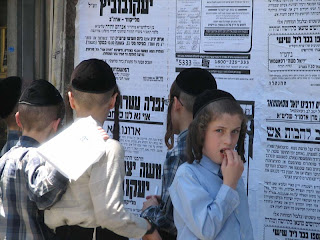 A pashkevil is a flyer or poster which is distributed or pasted up in Chareidi communities, making announcements to the public. They are often used as a means of putting pressure on individuals or institutions regarding policy or behaviour.
They are sometimes signed by the author, but are usually anonymous, or are signed by a fictitious committee, which usually consists of solely the author. Some claim to be written in the name of famous rabbis, but the authenticity of those rabbis support for the message of the pashkeville is dubious, at best.
For example, I have seen two pashkevilim recently in Ramat Bet Shemesh.
One was poster sized, glued onto almost every non-moving object in the neighborhood, denouncing in the strongest terms, a new yeshiva high school (accused of teaching some secular studies, rather than 100% torah studies); this pashkevil was apparently signed by a dozen or so leading Ashkenazi chareidi rabbis, who decreed eternal hell-fire (or local equivalent) for any father who sends his children to such a den of iniquity.
Another pashkevil, which I saw scattered on the streets this morning, was a half-A4 sized flyer, inviting the public to participate in the upcoming demonstrations at 11.00 am today, against the supermarket “Yesh”. A sister corporation to “Yesh” is allegedly open on Shabbos/Sabbath. These flyers were scattered just across the street from a new Chareidi-style supermarket, Barkol, a competitor to “Yesh”. It is signed by "Shomrei Shabbat" The Guardians of the Sabbath, Bet Shemesh - not any kind of official group I have heard of.
You probably get the idea. No-one takes these seriously, of course; on the other hand no-body wants to wake up one morning to find their name on such a Pashkevil.
Introducing… the National Religious Pashkevil!
A few dozen pashkevilim were apparently scattered outside the doors of two local chareidi rabbonim, the night before an important decision in the Municipality about the future of the Makvaot in Ramat Beit Shemesh.
The wording, my sources inform me, said:
הרב קופשיץ
והרב דוידוביץ
הסירו ידיכם רגלכם ועיניכם
מרמב"ש א'
ומהמקוואות של הנשים
אם לא תעזבו אותנו בשקט
אנו נחקור ונפרסם בריש גלי את
הגילוי עריות
והמשכב זכור
אצלכם בקהילה
ראו הוזהרתם!
Which, I translate for your convenience, to the best of my ability:
Rabbi Kopschitz
And Rabbi Davidovitch
Remove your hands, your feet and your eyes from Ramat Bet Shemesh Aleph and from the Mikvaot of the women.
If you do not leave us in quiet, we will investigate and publicise loudly the improper [sexual] relations and homosexuality which is within your community.
Take notice and be warned!
The decision in the municipality, the day after the Pashkevilim were distributed, went in favour of the National Religious position, and against that of Rabbi Davidovitch and Rabbi Kopschitz (who reputedly has great influence over his neighbor, the mayor Moshe Abutbol).
I do not know who published these audacious pashkevilim; they do seem to have created a rumpus.
Rafi Goldmeier’s Life In Israel blog, initially strongly condemned this "disgusting" behaviour by National Religious elements – as Rafi had been wrongly informed, by three different people, that the pashkevillim accused these rabbis of having themselves been guilty of sexual perversions, and that the pashkevilim had threatened to chase these two rabbis out of town.
Rafi quickly posted an amendment to his posting, stating he had been misled, and that the pashkevilim were not nearly so bad as he’d been led to understand. Rafi concluded: "It is still very inappropriate, but not what I originally thought."
So, what do you think of the (presumably) National Religious pashkevil??
Do you think that the leaders of the National Religious camp should join together to condemn the pashkevil?
national religious pashkevil