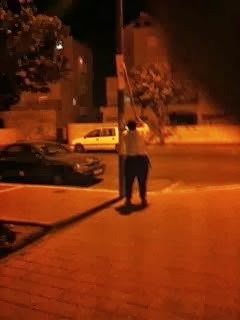 Unfortunately, sectarian tensions constantly bubble under the surface of Beit Shemesh, and these regularly express themselves in acts of violence, threats and intimidation. Our otherwise wonderful city has become internationally infamous for this internal strife.

Rabbi Avrohom Leventhal is the number two candidate for the moderate chareidi party "Tov" in the Beit Shemesh local elections.

Avrohom was out late last night, and saw a team of people putting up election posters for incumbent mayor Moshe Abutbol, on the street lamp-posts.

He approached the people doing this, and asked one of them whether this was legal?

That person refused to respond, so Avrohom took photographs, to give himself the option of pursuing this in future.

As Avrohom was walking away towards his house, he was pelted with stones by that person.

Avrohom told the man that, whereas he is uncertain of the legal standing of putting up posters without permission on public property, throwing stones at people is definitely a criminal act.

This morning, Avrohom brought his complaint to the Beit Shemesh police and the police have opened an investigation.

Meantime, the mayor himself put out a statement that the violence during the incident was from Avrohom, not from their campaign worker.

Once the mayor became aware there is a video of the incident, showing clearly that Avrohom was not violent, and Abutbul campaign worker was, and that there is an ongoing police investigation, Abutbul withdrew* his statement.

A spontaneous demonstration was hastily organized for that evening, to protest the use of violence in local politics and express solidarity with Rav Leventhal. I understand from the Tov office, that around 100 people attended the demo.

I vote for peaceful, respectful, honest and considerate electioneering!!
----
Update: I have now been told by 'a reliable source close to the incident' that the mayor has NOT yet retracted his statement blaming Avrohom for the violence...