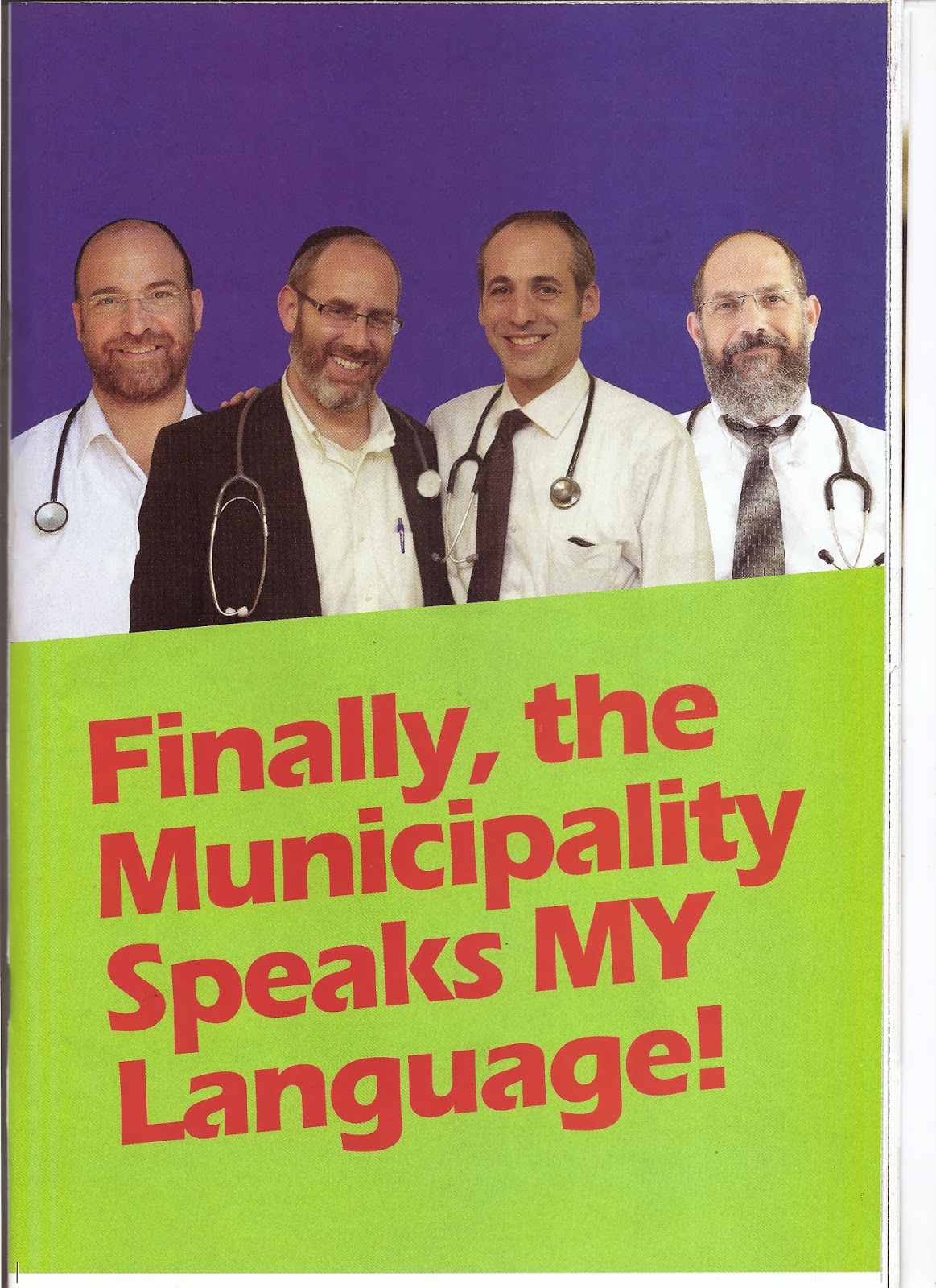 Ever since the appearance of the "four doctors" campaign last month,  hundreds of people - both Eli and Abutbol supporters alike- have questioned the exploitation of the medical profession toward a political goal, and the individual doctors and their kupot  have received dozens of complaints.   As an urgent care Pediatrician who has treated thousands of children from all kupot and walks of life in Bet Shemesh, and as a friend and colleague of the three pediatricians on the banner, I have been inundated over the past month regarding my opinion and stance on this issue.   Still others, knowing that I strongly support Eli Cohen, have questioned why I have limited my public support to a two-inch photo which was part of a montage of young and old supporters from all professions, hashkafot and backgrounds.  So I am writing to discuss these and other issues related to the four doctor campaign, including an aspect that may be of unexpected benefit to the community.

So, why didn't I want to be on a poster?  Besides the fact that blowing me up to the size of a four-story building accentuates my wrinkles and new grey hair, I worry that such a big-brother approach might alienate my patients and their parents.  I can imagine some Haredi family, indoctrinated that Eli supporters are sinful to the point of being חייב סקילה might  see my three-meter face smiling from some crane on the way to Terem for stitches or my house on Shabbat for an allergic reaction. Then- lo and behold- the man behind the stethoscope is none other than ד'ר אפיקורס himself.  But all kidding aside, while I understand that my colleagues felt obligated by Rabbinical mandate to support the Abutbol campaign, I do not believe something as sensitive, personal, and precious as the trust endowed in the medical care of one's child should be used to  support or influence  one's political outlook.  If you were disturbed, I urge you to speak with them personally; they are all very approachable.

In fact, I believe there has been some good that has come from the"four doctors" campaign, in that it has re-ignited the debate and controversy regarding the deprivation of secular knowledge that many Anglos impose upon their children.  This deprivation is contrary to the extensive secular education enjoyed by the parents they love and emulate, and therefore it is viewed as hypocritical by their children.  The line on the initial poster read:  "What do these four doctors have in common?"  The joke around the city- repeated to me innumerable times- is that an appropriate answer would be "Well, none of their children will be doctors."  This response, even when made in jest, is unfair- we really don't know what will become of our youth.

But the question remains- If the Anglo-Charedi community holds the value of advanced secular education in disdain, then why, when choosing its spokesmen for the mayoral campaign, did the campaign chose four doctors at all? If the campaign was looking for symbols of authority and respect, then instead of four doctors "uniting forces" from different kupot, why not four Rabbis, or four Avrechim, "uniting forces" from different kehillot?  Obviously, the respect accredited these men derives from the fact that they are physicians. And ironically, each of them got that way by immersing for over 25 years in intense secular education.  This is not sinful; on the contrary, these four Anglo-Haredi men are models of success. They have proven that someone can be both a Torah Jew and a physician, that the world of secular studies, gainful employment, and professional contribution to society need not contradict, but rather can and should complement the world of Torah.  So the question being asked (albeit quietly) among many of my Anglo-Charedi friends is very simple: If the four doctors can do it, then why can't my child too?  And why should I be the one to tell him he can't?  Similarly, we can only guess how many children look up at those towering four men in their black kippot and stethoscopes and say- "Wow- to be a talmid chacham and a doctor- just like the Rambam and Ramban!  Now why can't I do that? Why won't my parents let me try?"
Some Anglo-Charedi schools in our area, to their credit, have attempted to address this issue with expanded curriculum and counseling.  Sadly, other institutions have taken a more insular and reactionary approach, setting more restrictive guidelines of admission and enforcement, even to the point of refusing admission solely on the basis of some questionable, petty aspect of dress, technology or other vestige "modernity" rumored to be in the home.

I am aware that many would prefer to ignore these issues.  For daring to bring them up, I will indeed be branded by some as ד'ר אפיקורס.  But these issues are real, and ignoring them won't solve the problem.

Next week the election will be over, and we will go on with our lives.  But the four doctors campaign has fortunately given the Anglo-Charedi community something to think about, the opportunity to discuss important issues, and if something can be done, then that would truly be "progress you can't deny".

Wishing everyone a year of good health, Moshe Halberstadt