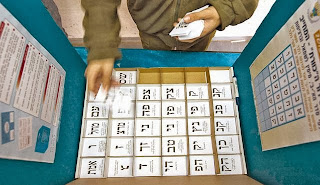 As I voted at a ballot box in Beit Shemesh for Israel's municipal elections yesterday, I recalled the voting jetons (pictured above) I saw recently in an archaeological museum in Athens.

In 500 BCE, Athenian citizens used these jetons to cast their ballots for political candidates.

It is astounding how little has changed since then.

In Israel, we have a wide array of voting slips displayed at the voting booth (example above), and one needs to match up the name of the party with the large letter symbols on the slips, and place one of them in the envelope. You then put the envelope in the ballot box. For local elections you get two votes, and so do this procedure again for mayoral candidates.

It can get somewhat confusing - for example in the Beit Shemesh elections, Eli Cohen, (unsuccessfully - more about that when the pain subsides..) running for mayor,  also headed a list of candidates for the city council. The code letters for that party were טב.

The confusion of טב with טוב was easy to make.

Along with that, there are strict rules about not tearing or folding one's paper slips, which invalidates the vote. And unscrupulous folks steal, fold or tear unliked parties' slips from the piles (believe it or not) so the next voter loses that option. (People were caught doing this in Beit Shemesh yesterday)

And then there's the vote counting process, which consists of multiple counts of these paper slips, which is labour intensive (by people who only do this once every several years) and means that election results only become clear about five hours after the end of voting.

The mini-industry of exit polls has therefore filled the vacuum, fed by public interest, between the end of the vote, and the announcement of the actual results.

The antiquated voting system is in part to blame for low turn out, even of the hyper-politically-aware Israelis; in these elections the national average was about 40% participation.

In other words, the majority vote (60%) and clear winner was the I-Can't-Be-Bothered-Party.

And national elections are a national holiday, effectively closing the country down for 24 hours, for the election process to unfold. Whereas this is nice for employees, it is a huge economic cost - employees are paid, nothing is earned, taxes are not paid, etc.

Surely, in 2013, the start-up nation can come up with an improved voting method which encourages participation (the first rule of democracy?), avoids as much confusion as possible, gives clear and close-to-instant results when the voting is completed and doesn't cost the country a full work day.

In an era where I can transfer money from my bank account, access my medical files, make credit card purchases, safely and conveniently on-line - surely it should be technically possible to vote, from the comfort of my home.

Many other countries have gone the lesser route of electronic voting machines, which are physically located at the polling stations (ie not remote systems).

We are due to have the next general elections in Israel in 2017.

Plenty of time to have a pilot on-line voting system up-and-running...!