It is increasingly popular for both brides and grooms to ascend to Temple Mount on their wedding days.

So, yesterday, my son Raphael's wedding day, Raphael and me made an early start, went to dip in a local mikve, and then headed to Jerusalem. 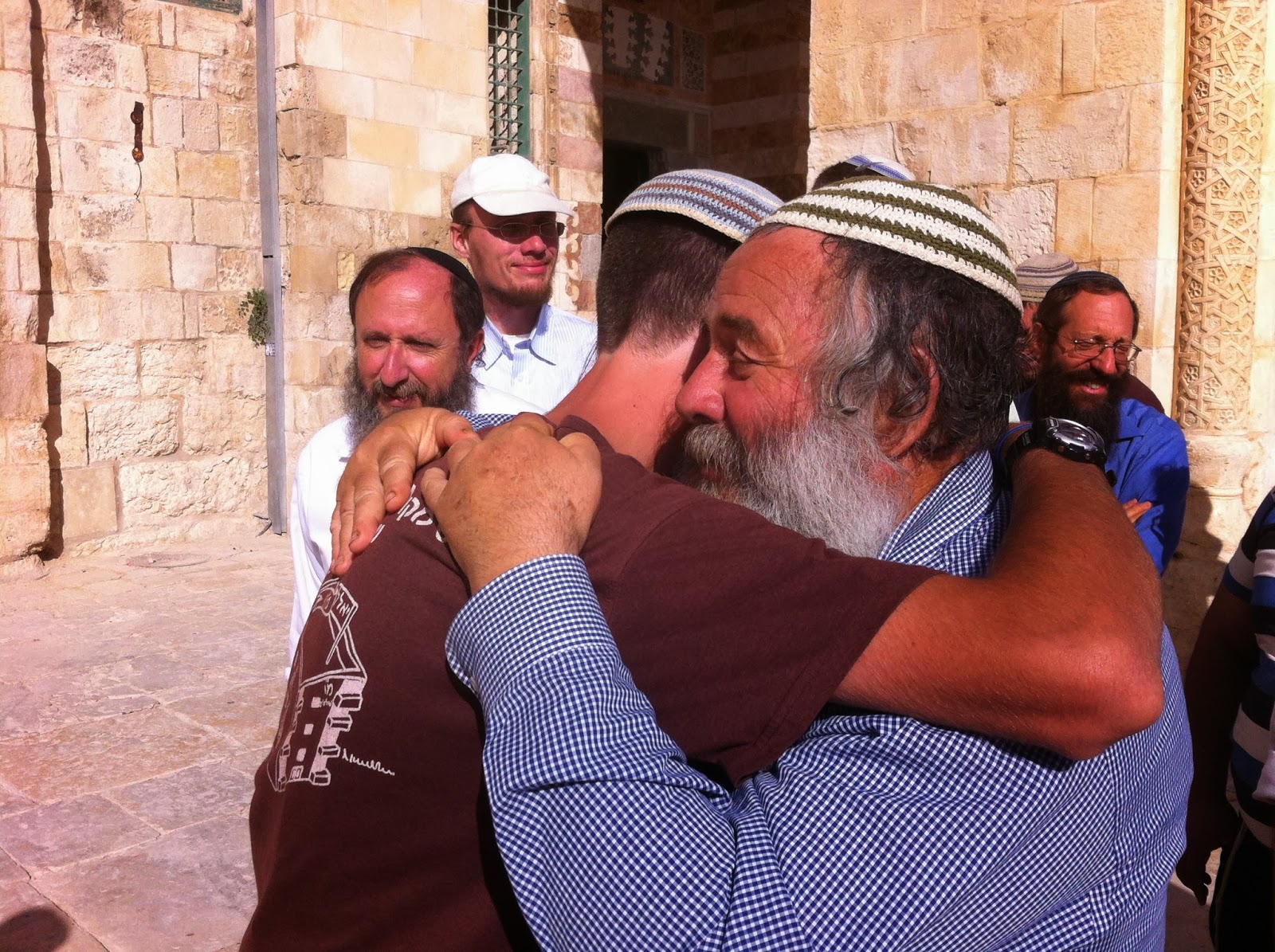 We davened at the kotel; then we went to the bottom of the adjacent Mugrabi bridge/ramp, to meet up with Rabbi Yehudah Glick, a foremost expert on the history of Temple Mount.

Raphael's bride, Aviya, was a few minutes ahead of us; we were careful to avoid meeting her and her entourage, in keeping with the tradition that the groom and bride should not see each other for a week before their wedding.

Rabbi Glick briefed us on the do's and don'ts for Jews visiting Temple Mount. It is forbidden by Israeli law and the police for Jews to pray on Temple Mount, nor to do anything which could be prayings, such as moving one's lips, bowing, prostrating, or reading a prayer book (which is contraband). In addition, Rabbi Glick impressed upon us the importance of avoiding trouble, as any problems can negatively impact the access for other Jews in the future.

Having said that, he pointed out that the rules only apply on the Mount, but not on the ramp leading to the Mount. He thus broke into a round of wedding songs, and we sang and danced Raphael up the ramp.

When we reached the gate, we passed through it and then turned left (North), moving around the plateau in a clockwise direction, especially for brides and grooms. Regular groups of Jewish visitors take the route in an anti-clockwise direction. Therefore, if we were to meet up with other groups, this would prompt them to ask "why are you going the other direction?!" and then to wish the happy groom or bride a hearty "mazaltov"

The Dome of the Rock, directly in front of us, is the most stunning building - the dazzling gold dome and blue mosaic building is an architectural masterpiece going back to 600 CE.

According to Rabbi Glick, this was almost certainly the site of both Holy Temples and, G-d willing, of the Third Temple.

We were able to advance to the site of the 'real Western Wall' (today's Western Wall is a supporting wall for the mountain itself, not a wall of the Temple) - which is now marked by a series of stone steps leading to the Dome.

Rabbi Glick brought the site to life by showing us Temple Institute paintings of how the same sites looked during the times of the Temples.

Rabbi Glick pointed to some exposed rock on the ground and told us that this was significant as it is bed-rock, and shows the gradient of the original hill - climbing to today's Dome.

At another location (to the East) Rabbi Glick showed us the spot aligned with the entrance of the Temple, on a distant hill, where the Red Heifer was offered - at a site now marked by a church.

Rabbi Glick described the night ten years ago, when 300 trucks took thousands of tons of 'debris' from the building site of a new mosque on Temple Mount, the largest in the Middle East. This 'refuse' was actually including invaluable and irreplaceable artifacts from first and second temple times - and was scattered at dumps around the city.

The tour was interspersed by meetings with groups touring in the opposite direction. These meetings achieved some prominence on Arutz 7 and other local media:

As we passed various Moslem prayer groups, both men's and women's, they chanted "Alah Akbar/God is Great", the moslem war cry,  and "kill the Jews". One woman threw a shoes at us, which is considered a highly insulting act.

In contrast to this welcome, Rabbi Glick systematically and cheerily greeted all the non-Jewish, non-Moslem tourists, with a broad smile and hearty "Welcome to the site of the Holy Temple!" and engaging each person in a friendly discussion.

Rabbi Glick explained that we are the Balei Bait (owners of the property) here and we should greet everyone appropriately.

At all times we were escorted by an assigned armed policeman, as well as a couple of 'observers' with walkie-talkies from the Wakf muslim authority. They intervened several times during the tour to stop us from possibly doing any forbidden activity.

One guy was told off for swaying his body while listening intently to Rabbi Glick's explanations.

On another occasion, which nearly sparked an international incident, Rabbi Glick used a plastic snack-bag to put a small quantity of dirt in it, for use under the chupa at Raphael's wedding, placing on his forehead.

This was stopped by the policeman, who called the officer, who tried to contact the Chief of Police for Holy Sites, Avi Bitton. Rabbi Glick derisively and dramatically poured the dirt back onto the ground. Meanwhile, another portion of dirt was somehow collected and secreted away by someone for the chupa.

The whole one-hour visit to Temple Mount was a most amazing experience - and highly recommend!

Although Temple Mount is not fully in our hands, the practical ability of Jews today to visit our most holy site in the world, after two thousand years of enforced absence, is awesome. 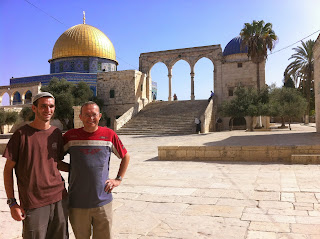 I look forward to the Israeli Government (being capable? willing??) to truly taking control of the Mount, and to beginning construction work!