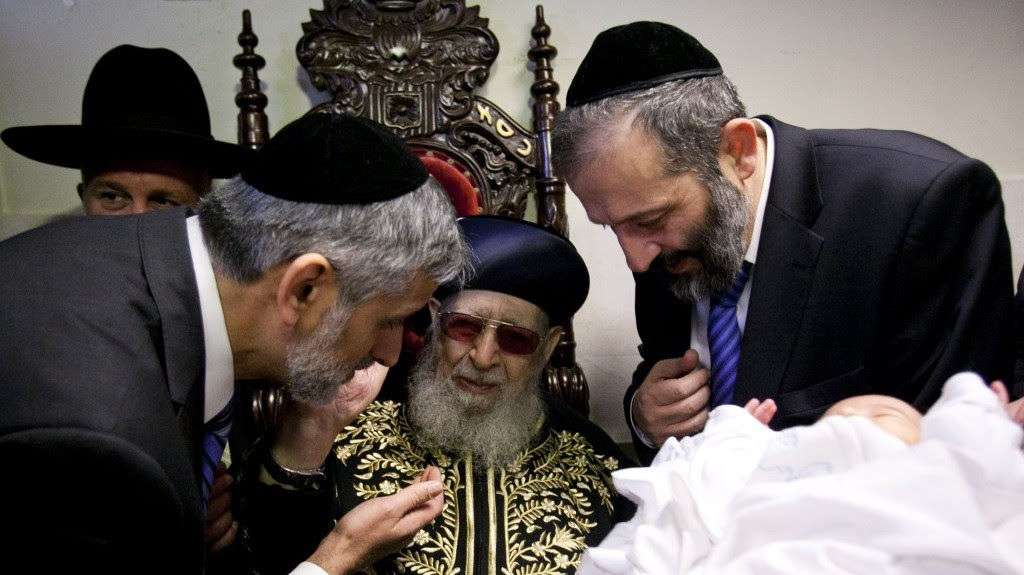 In Israel, there is absolutely no delineation between church and State.

For example, Rav Eliezer Shach, as well as being a Rosh Yeshiva of Ponevezh,  was a political leader in Agudat Yisrael, then worked with Rav Ovadiah Yosef to establish Shas, and subsequently formed Degel Hatorah. Rav Shach sought out and obtained the political partnership of two other roshei yeshiva, Rav Elyashiv and Rav Steinman, in developing the political party Degel Hatorah.

Rav Ovadiah Yosef ztz"l was both a torah genius & undisputed posek for the Sephardi world, and was also a highly accomplished and experienced politician. He both founded and controlled the Shas Party, effectively becoming a national statesman, as well as Gadol Hador.

At the local level, community rabbonim in Israel will frequently weigh in on political elections, backing this or another candidate or party. Forming blocks and alliances, invariably brings more political power to these religious community leaders.

We all know that politics is a particularly dirty business. A politician's word or promise on any specific issue has become a by-word for, worse than simply meaningless, but rather dishonesty, scheming and skulduggery.

On the other hand, rabbis are viewed as saintly, modest and impeccable role models for their lesser followers.  A rabbi's word is surely just that - his word and bond. His integrity is a given. His relationship with G-d and the knowledge and grasp of Torah is level way above the common man.

So how does one square scheming ego-driven politicians, with saintly talmidei chachamim - when they are so intrinsically intertwined - and are even the same human being??

One only needs to hear gedolei hador cursing out one another, and damning their political adversaries in blood-curdling street-language, to appreciate that we have a very real dissonance here.

Here in Beit Shemesh, a pashkeville/advert was apparently signed by leading chareidi rabbonim, both nationally and locally, using excessive language to promote their preferred candidate ("it is a religious obligation to vote for Moshe Abutbul and the Chen party list") while stamping out political dissent ("it is forbidden to not vote, or - G-d forbid - to vote for another candidate or party").

This is highly insulting to the intelligence and spiritual maturity of Beit Shemesh residents, who are quite capable of deciding which candidate is more qualified to be mayor, and which of the many political party lists to support - without bringing blessing, curses and arbitrary biblical quotations into the equation.

At least two of the signatories have claimed that they actually disagree with the pashkeville they signed.

Rabbi Malinowitz and Rabbi Myers have both apparently back-tracked (in part) from the statement, which effectively sends most/many of their respective kehillot - who don't robotically vote Abutbul/Chen - to hell's damnation.

All this is rather shocking to simple lay-folks  - as the rabbi/politician dissonance is glaring.

It's quite enough, frankly, to question whether the whole rabbinical power structure in Israel is no less corrupt than the political system.

With the exception that politicians are freely and openly elected or voted out every few years, whereas rabbonim often hold their unelected & unaccountable powerful positions even through their dotage, until their graves.

However, before we all throw away our kippot and move to the flesh-pots of Tel Aviv - I guess we can get philosophical for a moment.

Neither our image of scheming and megalomaniacal politicians, nor of our godly/saintly omniscient rabbonim, reflect the real world.

Politicians and rabbis are simply human beings - all presumably doing their best in complicated environments in the most sophisticated experiment conceivable - life itself.

If a rabbi decides to take the plunge into the party political mud bath, then they need to understand that new rules apply.

They cannot expect to retain their privileged honourable rabbinical status, while in their political roles.

They will need to grow new layers of skin and learn to roll with the punches. It is suddenly legitimate for regular folks to challenge, criticise and disagree with them - even if, as rabbis, they are used to their word being 'psak' - a final judgement, to be followed by their followers.

It is legitimate for voters who are members of the rabbi's community to think for themselves and vote for political candidates/parties which are not endorsed or promoted by their particular community rabbi.

Just as one can visit a doctor and accept his medical opinion, without voting for the political candidate he has endorsed.

Time to throw away the rose tinted glasses (rabbis as infallible saints), as well as to reject toxic cynicism (politicians as scheming devils) - as they can both be equally dangerous assumptions.

Both rabbonim and politicians are human, with all the strengths and failings this entails.

Time to get real.