Bet Shemesh - We Were Robbed 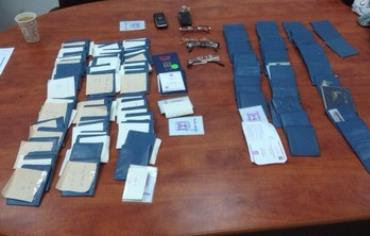 I was at a wedding on Monday night, and sat with some fine, educated and well informed people from Efrat.

I started to discuss the next day's municipal election in Bet Shemesh.

"Are the elections tomorrow?" he asked me. It transpired that neither he nor his wife were even aware of Municipal Domesday, which was happening the following day...

In many small town elections, a main contention might be whether to have a swimming pool, or a tennis court. Should certain streets be turned into pedestrian-only zones...and other such day-to-day important mundanities.

Here in Bet Shemesh the contentious issues seemed to mainly resolve around G-d and godliness.

That's rather a Biggy, and therefore, rather than being a gentlemanly contest between parties for seats on the town council, it resembled jihad.

Try as the non-Chareidi candidate, Eli Cohen, might, to address regular municipal issues, such as parks, cleanliness, safety, education, cultural events and transport....the ever-present issue was really that Eli Cohen's chosen lifestyle is sephardi traditional, whereas the incumbent mayor,Moshe Abutbol, is sephardi ultra-orthodox.

Beit Shemesh has a history of religious flare-ups and civil disturbance, ever since thousands of ultra-orthodox families started to move into the traditional sephardi town, about twenty years ago.

The ultra-orthodox campaign used highly charged language and tactics - blessings and curses (and lies) dispensed by rabbis from pulpits, holocaust imagery in political adverts, slurs of "Nazis!" hurled at anyone non-chareidi in the streets, production & use of fraudulent rabbinical approbations, criminal use of fraudulent ID cards, cheating during the voting process, stone-throwing at a political opponent, illegal use of educational facilities and institutions, illegal use of child labour, importing and paying national religiously dressed school-kids to appear to support the chareidi candidate, as well as the more humdrum pathological smearing and lying about the competition and provable facts.

Perhaps the most startling chareidi innovation of this election was the 'permit/heter' issued to Abutbol supporters to desecrate the holy shabbos - such as by tearing down 'enemy' banners and materials after candle-lighting on Friday nights.

These and many other outrageous behaviours were not occasional aberrations, but were an intrinsic part of the ultra-orthodox campaign.

The message to me was clear - in a Holy War, all tactics are permissible.

Indeed, in the main rabbinical approbation (Kol Korei) of the campaign, signed by over 20 leading chareidi rabbonim, both national and local, which was republished ad-nauseam, stated that supporting Abutbol and the "Chen" Agudat Yisrael party, was a mitzva (commandment) and that not voting, or voting for someone else, or another list, was an aveira (sin against the Torah).

Ominously, the document's call to action instructed the public to use "all means possible" to influence people to vote for Abutbol +  Chen list. Although this may have been seen as purely rhetorical - it was clearly interpreted as a carte blanche to engage in criminal and unethical activities for The Greater Cause.

The end results of this filthy campaign, published today (following the soldiers' vote count) showed an Abutbol victory by around 1000 votes (out of 50,000 registered voters).

[Around 500 were accounted for by the maverick 'spoiler' non-chareidi Meir Balayish - the third no-hope candidate in the mayoral race].

The 1000 votes can surely be explained by the criminal/illegal elements - for example, around 250 ID's were discovered by police as a voting scam (8 people arrested, so far); countless others were also presumably used. Thousands of voters were coerced, blackmailed, misled and intimidated into voting Abutbol.

I am willing to be part of a losing team - particularly one which loses by fighting cleanly and with integrity.  Indeed, as a member of the National Religious camp I have got used to this role - as a group, we endeavour to play straight, and this often puts us at a disadvantage in the cynical rough-and-tumble of the the 'real world'.

However, I am not willing to be a victim of a crime.

Eli Cohen supporters, and other citizens who do not approve of the behaviour they witnessed, in the streets, in the communal institutions and in the voting stations - have appealed to the Supreme Court to over-rule the election results.

There is therefore an urgent call for people (like you and me!) to step forward to give testimony, provide photos, videos and other evidence of law-breaking and unethical behaviour. Contact this email address with your first-hand (no hearsay!) information: elicohenmayor@gmail.com

There is a very real chance for the Bet Shemesh election results to be over-ruled. Re-running local elections is actually part of the Israel system - used throughout the country when no one candidate has received more than 40% of the votes. These re-elections are planned for 5th November.

Beit Shemesh should also be required to re-run the election, this time under close supervision by the national government and law enforcement forces.

Moshe Abutbul and his campaign hustlers resorted to the lowest behaviours, in the Highest of Names.

I simply don't buy it that G-d wants us to win elections by lawlessness, corruption and systematic dishonesty.

At this point, I am rather envious of my friends in Efrat.