Rabbi Motti Elon, Takana, and the Rule of Law 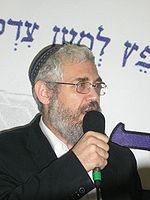 It has recently been reported that Rav Moti Elon will be indicted for sex crimes against minors.
This follows a year long police investigation, which was sparked off by the announcement in February 2010, by a then little-known organization Takana, alleging that Rav Elon had behaved inappropriately with male students.
This has subsequently raised questions regarding Takana itself.
While the public has been generally appreciative of the courage of Takana to ‘out’ Rav Elon, probably the most charismatic and popular rabbi in the National Religious camp, even with his own radio and national TV shows, it was questioned whether Takana themselves had actually covered up his alleged crimes for too long?
Takana’s mandate is to investigate allegations of inappropriate and abusive behaviour by rabbonim and teachers within the National Religious camp. Where the investigation shows the allegations to be substantive, corrective measures are recommended and implemented.
In the well publicized case of Rav Elon, for example, apparently allegations by male students, over the age of consent, were investigated, found credible, and Rav Elon was asked to comply with a behaviour protocol, for example demanding that all private meetings with students immediately desist.
Rav Elon apparently broke the protocol, and Takana took the heavy decision to warn the public of the risk Rav Elon’s behaviour presented.
Following the media hue and cry that the Rav Elon case then generated, more alleged victims reportedly came forward. These ones were minors. And the police took over.
It is important to note that Takana ONLY takes on cases of allegations of inappropriate behaviour – but not where the alleged behaviour is criminal under the Israeli law.
Those criminal cases they refer over to the authorities, being the police and/or social services.
There is now a question mark hanging over Takana’s decision to NOT announce the risk to the public of Rav Elon’s behaviours, when the allegations were first shown to be substantive.
Even though the allegations were from victims over the age of consent, perhaps Takana ought to have known that there were likely other victims out there, including minors?
During the two years period between the initial allegation to Takana, and Takana’s eventual public announcement, the public was at risk, and perhaps other attacks could have averted?
From where was Takana’s faith that Rav Elon would adhere to the behaviour protocol? What was the probability that such behaviour would or could be controlled by a protocol?
I do not claim to have clear-cut answers to these questions.
I do think that there is sometimes a regretful necessity to warn the public regarding individuals who present a risk to the community.
There is also a need to immediately involve the authorized and qualified parties in criminal cases – the police, courts, social services etc.
Protocols do also have their role, as a part of the community response and where qualified professionals advise they can be effective.
In the larger picture, an important step needs to be taken by ciminalising those in positions of authority and status who behave inappropriately with those under their authority.
In the army, a senior officer who initiates relations with a junior soldier, is court martialled.
In the work place, the boss cannot liaise sexually with his junior employee.
Such relationships are assumed to be, by nature, abusive. The second party cannot reasonably say No. So sexual consent cannot be assumed.
Similar rules must be codified in law.
A teacher or rabbi who has relations with their student or a member of their community, has abused that position of authority and status, and their victim. And that abuse should also be a crime.
Indeed, Takana itself is lobbying for such a law to be introduced in .
A law which would effectively take the remarkable and courageous people behind Takana out of this particular business, and replace them with the police.
child sex abuse rabbi motti elon