Rabbis For and Against Moshe Katsav 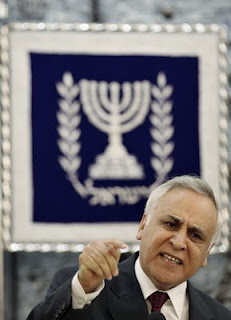 Katsav, who resigned from the Presidency in scandal, was subsequently found guilty on two counts of rape, obstructing justice and other charges on 30th December 2010. Katsav is currently awaiting sentencing, which is widely expected to include a prison term.

“To our country’s former president, fear not because the truth will come out,” the letter begins. “And even if it takes it’s time, it will be revealed, and all those who pursue lies will be ashamed, the rabbis wrote. “All of the people of Zion are sighing and groaning under the burden of the poisonous media, waiting for the return of pureness to our public life and hoping for the day when the injustice will be removed and the truth will come out – and then many, many people will be redeemed and rejoice with you.”

"Without getting into the details of the former president's trial and the punishment he deserves, we view the attempt to question the women who complained and the judges and to cover up the disgrace brought upon the presidency as extremely severe," the rabbis wrote.

I found myself absolutely amazed and horrified that the first letter was written and published by apparently such respectable rabbonim.

It is one thing to plead clemency for a convicted criminal – indeed this could be part of the legitimate legal process, and could include pointing to the career of public service by the convicted criminal, the ‘punishment’ already suffered via the forced resignation from prestigious office and the personal humiliation already endured by the ex-president. If the ex-president were to have expressed sincere regret at his crimes, this could also be used to plead for clemency (I am not aware Katsav has expressed any regret).

However, according to reports of the contents of this letter, the rabbis were undermining the justice system itself by claiming that the convicted criminal, Moshe Katsav, is actually innocent of all charges. And they were accusing the victims, witnesses, the court itself of injustice and corruption.

In the face of such an outrageous letter, the rejoinder from the (more) senior rabbis, in the format of a manifesto, was of some relief to me, and I’m sure to others both within and outside the national religious camp.

Our rabbis should use their authority and public standing to help protect and support victims, rather than abusing their office by attempting to vindicate convicted criminals.
moshe katsav rabbis