The Domino Effect in the Middle East 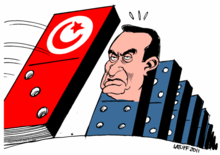 The impact of the Tunisian popular uprising and the ouster of President Ben Ali on 25th January, 2011, was quickly followed by popular demonstrations and riots in , bringing Hosni Mubarak’s 30 year regime to its knees.
Commentators around the world are now predicting a domino effect of regime changes throughout the .
After  - , , , maybe even are on the likely-candidates list. Spontaneous demonstrations have indeed been reported in each of these countries over the past weeks.
The “domino theory” was first popularized in the Cold War between the and the .
American politicians justified their intervention in far away lands, to fight the Red Peril of Communism.
In 1954, President Eisenhower said:
Finally, you have broader considerations that might follow what you would call the "falling domino" principle. You have a row of dominoes set up, you knock over the first one, and what will happen to the last one is the certainty that it will go over very quickly. So you could have a beginning of a disintegration that would have the most profound influences.
The Vietnam War itself was justified by the US Governments using the term “domino theory”, which was predicted to play out in the event of a take-over of by the communist North Vietnamese of the Vietminh regime.
This theory was illustrated at the time, thus:

However, in retrospect, the dominoes stopped falling.
Although , , , and fell to communism, , , , and all successfully resisted the communist influence.
What did actually better illustrate the domino effect, was the FALL of the . 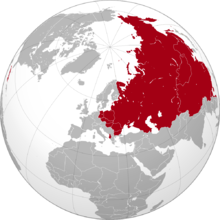 Under Mikhael Gorbachev, the whole vast “eastern block” of the 70 year old fearsome Soviet empire collapsed, domino style, between the years 1988 and 1991, at which time the itself ceased to exist.
Empires do have a habit of suddenly collapsing – the British Empire, The French Empire, The Ottoman Empire…all the way back to the Roman Empire, each collapsed spectacularly in a serial domino fashion, in a relatively short period of time.
So, when speculating as to the likelihood of the Tunisian and Egyptian revolts inevitably spreading throughout the , overthrowing each despotic leader and replacing them with Western democracies, my conclusion is this:
The domino effect has credibility as a theory, when describing COLLAPSE of regime types and empires.
It does not seem to work when describing the phenomena of BUILDING of new political movements and spheres of influence.
So, yes, the dictators who rule , , , the should now quake in their boots. The tsunami of regime destruction is heading your way.
However, for those who might predict that these regimes will pass bloodlessly into the Western Democracy model, or the opposite, that they will all come under the Iranian Islamic fundamentalist model, is far from predictable.
You can set up a line of dominoes on your kitchen table – and you will see for yourself that dominoes can knock each other down in rapid series, but they can’t build themselves back up. 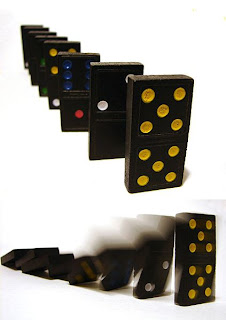