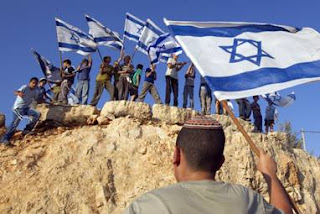 Hilltop youth is the term generally used to describe the movement of far right wing national religious youngsters (usually teenagers) who settle new hilltops or 'outposts' in Judea and Samaria.

This group regularly comes into conflict with the law - indeed, it is almost part of their dogma. These settlements which they create are deemed illegal by Israel's Government.

Another linked group are Temple Mount activists. These are people who are trying to raise awareness among Jews of the practical importance of Temple Mount and to increase Jewish presence there.

There were two legal victories reported (on YNet and Makor Rishon) for these groups in recent days.

Around a dozen hill-top youth have been charged in court on various occasions of breaking into a military no-go-zone. Of particular note is Ramat Migron, a satellite settlement to the somewhat larger Migron, which itself was forcefully moved by the Government a few hundred metres from its location in Samaria.

In order to keep kids from setting up camp in Ramat Migron (which has no permanent building structures) the army declared it a closed military zone, and rounded up anyone there, charging them with entering the restricted zone.

Defence Lawyer Itzik Bam made the case that these military zone declarations were themselves illegal and were merely a cynical device to restrict citizens freedom of movement.

The judge agreed with Bam, and instructed that all such charges, including retroactively, should be cancelled forthwith, Dozens of hilltop youths who saw their criminal records cancelled, popped champagne corks (or at least opened their lemonade).

The second case was concerning a recent incident on Temple Mount.

A young man had been arrested and charged with disturbing the public peace on Temple Mount, due to fact that the authorities discovered posters in his bag.

The police asked the court issue a restraining order, banning the suspect from entering Temple Mount for 30 days.

The judge asked what the actual alleged offense was, as having posters in one's bag (left at the guard-station outside of Temple Mount) was not in itself an offense.

The police representative floundered, and admitted that the suspect had not actually committed an offense, but...

The judge cut him short and threw out the case. The whole case was heard and dismissed within three minutes.