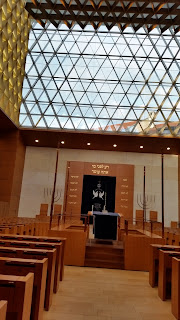 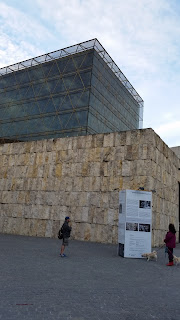 "The community didn't have to spend a penny, the whole building program was paid by the German Government!"

This was how a local answered my question "but who paid for all this?!", when I was in Munich this week.

I was hugely impressed by the grand style three new buildings which constitute the center for the Jewish community there.

A stupendous and magnificent synagogue; a sizable Jewish museum; and a community center complex which houses a classy (and only) kosher restaurant, a school, and a comprehensive community administration (employing 120 people). The whole three-building facility is built with security in mind and there is a 24/7 security & access control, bullet-proof glass, etc.

With a weekly shul attendance which struggles for a quorum/minyan, and is mainly reliant on passers-through (like me), it was hard to understand how this whole project was financed. We are talking around $150m: according to a Washington Post report the shul cost $72m; Wikipedia says the museum cost $17m; I couldn't find information about the cost of the community center building - I guess $50m.

Another individual who lives in Munich and is involved in the Jewish community explained that the Government had funded it via the "Church Tax".

The history of Church Tax goes way back, even to pre-Christian times, and is still levied in many European countries. In Germany it amounts to around 8% of the income tax payable by an individual.

The Jewish community complex in Munich is a beneficiary of this system, and many Jews pay in their Church Tax for re-distribution to the Jewish community. There are probably around 10,000 self-identified Jews in Munich, out of almost 100,000 Jews who now live in Germany. If an individual chooses to opt-out, they might not be buried (also married, barmitzvas etc) by the community.

So the initial statement that the community didn't have to pay for these three magnificent buildings at the heart of Munich, and that it was paid for by the Government, is not quite the whole story.

Actually, it seems the Jewish community did pay the bill, organized and imposed by and via the German Government.

This seems to be a very effective system for organizing and funding Jewish communities and their facilities.