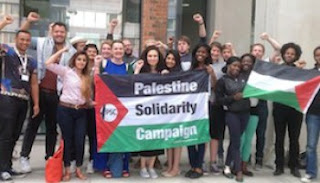 Israel's leadership has spotlighted the Boycott, Divestment and Sanctions Movement (BDS Movement) - with particular emphasis on the statements of the Stephane Richard, CEO of Orange telecomes giant in France, and of the British Studets Union, which has signed up for BDS.

Stephane Richard immediately apologised and retracted for his call to cut ties with Israel.

Indeed, in my experience from three decades ago, when I was a student at Newcastle University, there is nothing new under the sun when it comes to NUS's toxic attitude to Israel.

There were regular motions in the SU debating chamber condemning Israel for the latest "masacres" of Palestinians, and declaring Israel to be a "racist state" and Zionism itself to be "a form of racism".

JSOC was the shrill voice defending Israel, with help from our allies at the Conservative Party (a minority but strong party in the NUSU) and with back up forces from the London based Jewish Students' Union.

At one stage, NUSU, by an overwhelmng majority (it always was) passed an anti-Israel motion which directly attacked our JSOC. The logic was that if Zionism is racism, then our JSOC must be a racist group. In effect, "the bloody Jews are racists".

And so our JSOC was banned.

As we all know, Jews and Zionists are alleged to conspire to overthrow democracy and, now 30 years later, I can release information which supports this libel.

A quiet Jew was actually head of the Newcastle Students' Union at the time.

He told me, hushed, that he had quietly taken the ban-JSOC motion results out of the official Students Union ledger. Officially, there had been no motion, no vote, and the JSOC could continue to operate on campus.

He had erased the record, and so undermined the democratic process.

You've got to hand it to these Jews, no?!