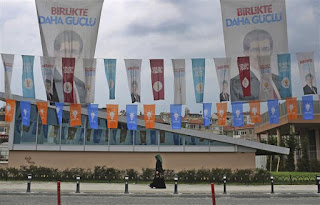 Although Turkey's most powerful politician Tayyip Erodogan, President of Turkey, was not standing, he was clearly the central player in that election.

Turkey's President is not elected by popular vote, and so Erdogan was not a candidate or even party leader.

However, Erdogan set some very high bars for his party in the election - which AKP failed to jump over.

Whereas AKP achieved (again) being the largest party with a respectable 41% vote (Netanyahu could only dream of such a victory for Likud..), Erdogan had set an ambitious target of achieving a two thirds majority in parliament. Such a majority would have given the AKP the ability to change the country's Constitution, and invest substantially increased power in the Presidential (ie Erdogan's) position.

In light of this ambition, the election result are a blow to Erdogan's domination of Turkish politics since his rise to power in 2002.

Far from creating a two thirds power-base, the elections have not given AKP a working majority in the parliament.

Another aspect of this over-ambition, was the AKP's controversial decision to raise the election threshold to 10%, in order to block the Kurdish party, HDP, Turkey's third largest party electorally, from achieving representation in the Turkish parliament.

This plan backfired, on two fronts.

Firstly, HDP succeeded in passing the higher threshold, with around 13% of the popular vote.

Secondly, due to a formula in the election system, HDP's larger-than-expected voter turn out disproportionately impacted AKP's own representation in parliament.

The only unsurprising result in this election was the second party, the secular CHP, who remained with around 25% of the vote.

It is now unclear how the AKP will translate its status as the largest party, into a working Government. This will require a coalition. However, both HDP and CHP committed themselves during the elections to not join a AKP led government.

While the composition of Turkey's next ruling government is uncertain, what is certain is that Erdogan's political over-ambitions, at least for now, have been placed in the dustbin of history.