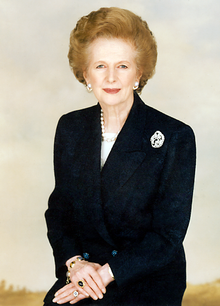 Asking a Brit like me, brought up during the time of Mrs Margaret Thatcher, of his memories of "Maggie" and you'll evoke a melange of macro and micro. Of national and personal experiences. Buried passions, rusty disputes, and biographical snippets.

I never met Maggie - indeed I don't know if I've met anyone who met her! - but the events of Mrs Thatcher's period in the Prime Ministers office (1979-90) influenced and formed me, as they did many (all?) of my generation.

Mrs T was the absolute political leader in the eyes of the Morris family. My dad, in particular, was a fan, a devote. Voting Conservative, reading the Daily Mail and Telegraph, welcoming "monetarism", and seeing only Maggie's side of the story, while despising her opponents, was as natural as having your tea with milk.

It was only many years later, when I slipped into discussing politics (actually Gush Katif activism, which was then in its hey-day) with my visiting British relative Andy, that it even dawned on me that those who opposed Mrs Thatcher also had a narrative.

Andy happened to mention that he was a student during the miner's strike, and was part of the 'flying pickets'. He could have confided that he was actually an extra-terrestrial alien - and I would not have done such a double-take.

The flying pickets were the striking miners' tactical response to Mrs Thatcher's outlawing of secondary pickets (Joe joins the picket lines at Harry's mine). The flying pickets would show up and disappear at miners picket lines, popping up around the country, demonstrating, moving on, before they could be arrested by the slower moving police. Apparently Andy was arrested for this activism at the time.

And deservedly so, I would have intoned in 1984. The bloody miners were a bunch of militant commies. Surely?

However, Andy's an eminently intelligent and reasonable guy. And this revelation caused me to revisit my teenage, parental & friends' spoon-fed, assumptions.

Mrs Thatcher's confrontational approach to bringing down the powerful Trade Union Movement in the UK, indeed had an aspect of Arik Sharon's "Disengagement" and withdrawal from Gush Katif.

The miners were not so much obstacles to economic progress (as I saw them at the time), but rather thousands of families whose way of life, villages and communities were facing closure, abandonment and devastation - on the basis of a coldly economic justification. If the mine is 'not economic' it had no justification existing, and should be shut down.

Of course, I was proud and flag-waving when Mrs T sent our battleships thousands of miles to liberate the Falkland Islands - and thrilled with patriotism as the brave British troops sent the "Argies" back to their Juntas in Buenos Aires.

And I was stunned, horrified and disgusted by the murderous IRA bomb attack on Mrs Thatcher's hotel in Brighton, where many leaders of the Conservative Party were attending the annual Party Conference. It was as close to Guy Fawkes apocalypse as Britain had seen in centuries.

We were enchanted by the politico-love-story which developed between Mrs Thatcher and Ronald Reagan. And by the turn-around in British-Soviet relations - personified by her transition from formidable Iron Lady, building up a strong nuclear Britain, to her subsequent warm relationship with Mikhale Gorbachev.

I never really grasped the mechanisms of Mrs Thatchers ouster. She had won three elections and was sitting pretty in office. And then her own cabinet ministers deposed her, almost coup-d'etate style. Mrs Thatcher was in power one minute, then out on the streets the next. Without any electoral process.