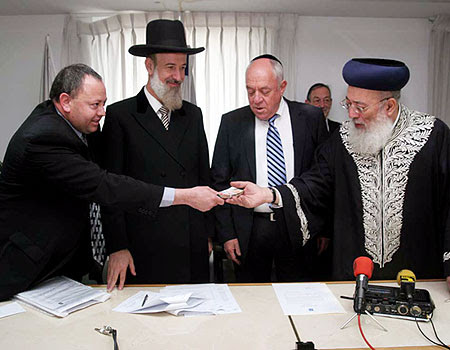 Introduction (4th April, 2013): This was an article I wrote on 1st April, which ths year coincided with the last day of (and after) Pesach in Israel. It was an April Fool. It appears to have fooled quite a few people. If you're one of them, and are still waiting for the chametz van - relax. Enjoy. Eat your chametz!! Gotcha!
---------

Minutes after the close of the Passover Holiday, the city of Beit Shemesh in Israel was thrown into tumult.

The deal hinges on several legalities, including that the non-Jew who purchases the leavened products retains the right to buy the products outright immediately following the end of the festival.

This is generally assumed to be a legal fiction, as to the best of anyone's knowledge, no gentile has ever taken up the usually over-priced purchase offer.

In the town of Beit Shemesh, the city's Chief Rabbi, Rav Biton, completed the leavened sale arrangements, as in previous years, with Mr Jabril Musmar, of the nearby Arab town of Abu Gosh, which is located off the highway leading from Tel Aviv to Jerusalem.

However, much to Rav Biton's surprise, Mr Musmar called the rabbi a few minutes after the end of Passover on Monday evening, and informed him that he will pay the $1.5 million to purchase the leavened products from Beit Shemesh.

There seems to be no precedent to this, so Rav Biton contacted Chief Rabbi Amar, who advised Rav Biton that arrangements must be immediately put into action to collect all the city's residents leavened products, for Mr Musmar to pick up, using his own transport, on Tuesday morning. Jews who had sold their produce via Mr Musmar were forbidden to consume or gain benefit from their leavened products.

The municipality arranged vehicles to announce the new arrangements and municipal workers were quickly called from their homes to participate in the collection process.

As of press time, over 200,000 bags of pasta, over 50,000 bottles of beer, 1732 bottles of whiskey and numerous other products had been collected, and positioned in front of city hall for the morning's pick up by Mr Musmar. Municipal authorities estimate there is a further 75 tonnes of produce which is still in resident's homes and in business premises around the city.

Whereas Rav Biton was unavailable for comment, Mr Jabril Musmar told us that "I think this is a good deal, and that the collected produce will be worth over $1.5m."