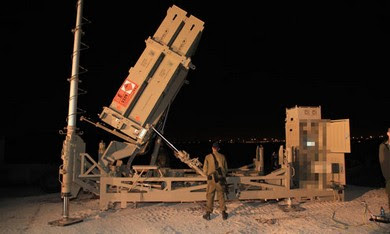 ’s most pressing threat is not Hamas, but .

It is true that Hamas is armed to the teeth with rockets and missiles, and is trigger-happy to use them on ’s populations.

However, is developing a nuclear weapon, with means of delivery – which is planned to result in the decimation of .

So why has ’s leadership and armed forces apparently been distracted into a parochial war against Hamas?

When the IDF assassinated Ahmed Jabari and his son Mohammed al-Homs last Wednesday, with gall and in broad daylight, ’s leadership surely knew it would provoke Hamas into a belligerent response.

Hamas so far has fired over seven hundred rockets and missiles at ’s population centers throughout the South, and even in central . With no end in sight.

What’s the point in this deathly ping-pong with Hamas??

I propose that the answer is that it is a pre-emptive strike by , in advance of a direct attack on

One of the disincentives for Israel to attack , is the likely counterattack by ’s proxies.

There are three proxies on ’s borders, being the Assad regime in , the Hezbollah in and Hamas in . They are each formidably armed - supplied and paid for by the Iranians.

Add this to ’s own long range surface to surface missiles, airforce and navy (including submarines) – the result would be a four front war for , placing every town, indeed every Israeli, in immense peril.

is today fully occupied with their civil war, and has ceased to present an imminent credible threat to , even in the event of our attack upon .

This leaves Hamas and Hezbollah.

A month ago, the Yarmouk Arms in factory was destroyed in , reportedly by Israeli planes. was manufacturing Fajr-5 surface to surface missiles there, for onward shipment through the Sinai to .

Indeed such an arms convoy from  to Gaza was destroyed, apparently by , in January 2009.

Last week, in the same hour that ’s airforce assassinated Jabari, the air force also aimed to destroy the assembly and storage facilities of Hamas’ missiles – with a particular eye on the long distance Iranian Fajr-5.

A result of this current operation in , will be to deplete Hamas’ supplies of surface to surface missiles – whether by directly destroying them and their launchers on the ground, or by Hamas firing them off towards .

If all else fails, the Israeli army ground forces will go in to finish this job on the ground in .

Once this operation is complete, Hamas will be neutralized as an effective Iranian proxy, for at least a year or two.

Enough time for ’s strike on .

Of course, this still leaves Hezbollah as a second proxy front for ...