In Tel Aviv During Bombing 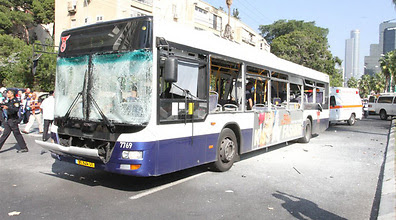 The ambulance sirens alerted me to the bombing.

Just a few hundred yards from my meeting this morning in central Tel Aviv, passengers on a bus were the target for a terrorist bomb.

A few minutes later, I boarded a bus, and passed the landmark Azrieli Building, where I witnessed the scene of a 'false positive' - where members of the public alerted the emergency services to a suspected bomb.

There were multiple ambulances, police and army everywhere.

The final toll from the bomb on the bus was 20 injured, three "seriously".

By the way, have you ever wondered what the media/police mean when they use the term "seriously injured"?

Here's a definition from Wikipedia: An injury for which a person is detained in hospital as an 'in- patient', injury or any of the following injuries whether or not they are detained in hospital: fractures, concussion, internal injuries, crushings, burns (excluding friction burns), severe cuts, severe general shock requiring medical treatment and injuries causing death 30 or more days after the accident.

These events take Israelis back to the nightmare second intifada, when Arab terrorists murdered over one thousand Israelis by bus bombings and blowing up cafes full of people - which became a daily tragic horror.