Understanding The Weak Link in the Eurozone 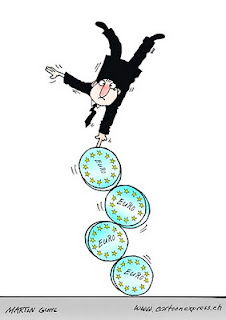 , , , , are on the terminally ill list. Earning themselves the lack-luster title "PIIGS".

And the Euro-Zone itself appears to be on the verge of collapse.

I am not an economist, and probably neither are you. So it's hard to follow the causes and effects of this crisis, never mind intelligently guage its future.

Here's my best effort to share with you my understanding of the problem. This is not authoritative in any way – please feel free to correct me in the comments section.

In post-War Europe, the idea of a coalition of European countries, sharing certain economic & political values, financial mechanisms and strong performance – basically a rich (white?) man's club – certainly had its attractions. While uniting past bitter enemies in a common pursuit of economic stability and controlled growth, the coalition also faced off as a bastion of capitalism, against Soviet Block Communism.

Since the 1950's, this has been a remarkably successful idea – and has impacted all aspects of life on the European continent.

Today, the European Union has 29 member states and is the world's strongest economic entity. 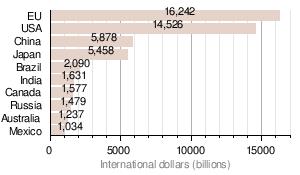 Of these, 12 member states have joined together (the "Eurozone" - see map below) to ditch their traditional national currencies (Francs,  Marks, Liras et al) and share the Euro as their common currency. The Euro was launched as an accounting currency in 1999, and in 2002 as the currency of the street. 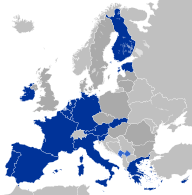 The Euro now accounts for 25% of international money reserves, and is the second world currency to the dollar.

So what's the problem?

As I understand it, conventional national currencies (pounds, dollars, shekels...) are an important tool for economists and governments to control their economies.

A bit like a driver has a steering wheel, brakes, gears, accelerator, etc to keep him on the road, and get him to his destination – so governments and economists have their instruments of control, such as interest rates, government stocks/bonds, reserves, budget surplus/deficit , etc and, in traditional economies, their own tender/currency.

What seems to have happened is that several national economies in are like cars in a skid.

Their national debt is high, due to topsy-turvy Government budgets – running high deficits, effectively spending far more than they have.

This doesn't need to be an existential threat – witness the which overspends by trillions of dollars – unimaginably huge amounts of money each year.

The "simply" prints up more dollars, and issues Government stock at attractive interest rates, to cover the debt. (Which, ahem, has been downgraded to AAA minus).

These indebted European countries have responded by issuing more Government Stocks to finance their overdraft, and they are enticing investors by offering 'attractive' interest rates.

However, they cannot simply print up more Liras or Drachmas, as an additional economic control. These countries don't have their independent currencies any more.

So 'attractive' rates on their Government Stocks have become highly inflated – reaching 7%.

The combo of high national debt, with high interest to Government Bond buyers, and underperforming economies, has resulted in a downward spiral. The higher the interest on the debt, the more likely the Government is to be unable to repay it, particularly in economic hard times, and therefore default. Therefore they need to offer more 'attractive' rates of interest, etc..etc..

This is where the European Central Bank steps in, to fill in the hole – they'll buy the Bonds, inject Euros, prop up these member nations to regain confidence, thus reduce the interest on the bonds, reverse the spiral.

The price the European Bank charges to the recipient of all this aid, is to demand that the member reduces their budget deficit – ie spend less (or earn more – unlikely in an economic downturn).

This worked for and .

However, the Greeks have had a hard time politically meeting the EU's terms for reducing the budget deficit – as this results in levels of national deprivation which can destablise the population (visions of another Arab Spring – in !). Thus the Greek Prime Minister resigned.

As for the Italians – this is a very large economy. According to Wikipedia, Italy has the world's third largest gold reserves, the eighth largest nominal GDP, tenth highest GDP and sixth highest government budget in the world.

With 's Government Bond interest rates exceeding 7%, which is considered unsustainable, is looking at bankruptcy/insolvency. And so 's colourful Prime Minister Silvio Berlusconi has put up a white flag, and resigned.

The economic crisis can spread further – and are in the cross-hairs.

The only economies in which are large and strong enough to help, are and the . The is (smartly - in retrospect) outside of the Euro. And so is left as the sole address.

Whereas I think I may have some handle on the process which has got to this dismal point, I am flummoxed what the coming days, weeks and months will bring to the Eurozone…