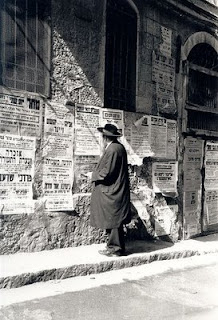 A “Pashkevil” is a printed notice, particularly used in Orthodox Jewish communities, which is glued on walls and notice boards in public areas.
Announcements can be that someone has died, or that a certain rabbi will be speaking, or, more controversially, derogatory announcements against this or that behaviour or particular individual. Usually these notices are anonymous, or are apparently signed by rabbinical leaders, but whose signatures are often not authentic.
Here in Ramat Bet Shemesh, pashkevilim recently went up around town, denouncing the establishment of a yeshiva here which, alongside torah studies, also teaches secular studies.
I recently wrote about Rav Soloveichik's sermon, in which he criticised another Pashkevil, which was rare or unique, in that the distasteful Pashkevil was apparently published by National Religious activists.
As a response to the phenomenon of pashkevilim, Rabbi Yaakov Haber, together with members of his Kehilat Shivtei Yeshurun community, have prepared and published the ultimate paskevil.
This Mother-Of-All-Pashkevilim http://www.torahlab.org/haberblog  extensively quotes the Chafetz Chaim’s denouncement of Pashkevilim, and imitates the style and format of conventional paskevilim. 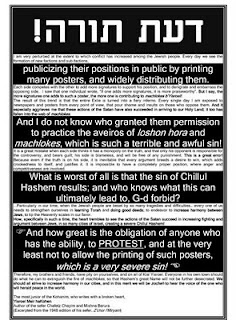 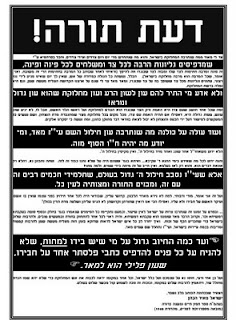 As a footnote, I note that the Yiddish word “pashkevil” is derived from the French “Pasquil" – meaning, a lampoon, parody or satirical piece of writing, posted in a public place.
Therefore, I think this anti-pashkevil-pashkevil is more authentic than any other pashkevil I've seen.
pashkevil Rabbi Yaakov Haber ramat beit shemesh