Who Needs A Bigger Coalition? 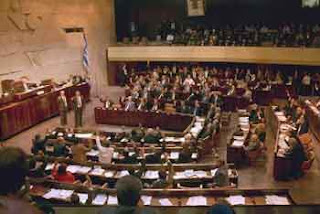 Many Israeli Governments over the history of the State have fallen due to coalition parties breaking ranks and undermining the ruling majority. Therefore, every Prime Minister works to keep his parliamentary majority as large and stable as he can.

However, with Netanyahu's healthy majority in his coalition, being 78 of the 120 MK’s, it’s hard to see the urgency.

In the current case, if Kadima, who have 28 members of Kenesset,  were to agree to join the Netanyahu Government, the prime minister would head a coalition of 102 MKs out of 120 MK’s in the Kenesset. This would leave a jumble of small parties in opposition, being Hadash, Ichud HaLeumi (National Union), Ra’am Tal, Meretz and National Democratic Assembly – just 18 MKs.  Probably the smallest opposition in the history of the State.

So stability would be ensured, as much as anything can be considered ‘certain’ in the fickle world of Israeli politics.

Even if Livni does not accept Netanyahu’s offers to join the Government, which seems likely, then Netanyahu has offered seven individual Kadima MK’s feather-bed landings into his Government, to encourage them to break their party ranks and join him anyway.

Given that Netanyahu anyway has a comfortable majority, why the sudden move to strengthen his coalition – leaving the country effectively no opposition, and does this matter?

I bring into the picture Ehud Barak’s recent confronation against the Har Bracha Heseder (Army) Yeshiva; Barak has chosen to pick a very public fight with Rabbi Eliezer Malamed, Rosh HaYeshiva of Har Bracha, due to Barak’s claims that Rav Melamed encourages dissent in the ranks of the soldiers. For the first time in 50 years of Hesder, a Yeshiva has been dismissed from the arrangement with the Army.

Perhaps the two moves are linked; Netanyahu’s bid to broaden an already wide coalition, and Barak’s fight with dissonant voices in the army.

There are two major Israeli security operations which one could foresee during 2010.

A long awaited strike on .

And a major withdrawal from Jewish villages and towns in Judea & Samaria () or from the Golan.

Israeli Governments have traditionally put aside their daily squabbles in time of War or major defense operations – to present the outside world with a wall of national unity and consensus. Therefore, if strikes , Kadima would in any case close ranks with the Government. There would be no purpose served by bringing Kadima into the Government coalition now.

This leaves a major planned withdrawal from Israeli “occupied” territory.

Netanyahu would face considerable challenges in delivering such a withdrawal with his current coalition – Avigdor Leiberman’s Yisrael Beiteinu (Israel Our Homeland), through HaBayit Hayhudi (Jewish Home – the old Maphdal), to some of Netanyahu’s own colleagues in Likud, would all oppose such a withdrawal. With only Labour (Barak) as a staunch supporter of an Israeli withdrawal or anti-settlement campaign, Netanyahu would probably not carry the day in the Keneset with his current coalition.

Back in the Army, for Barak to be assured of the military ability to deliver a major withdrawal program – he needs to know there will not be widespread insubordination amongst the troops. Specifically from amongst the highly motivated and nationalistic Hesder and other National Religious soldiers, who now constitute 25% of the Army’s combat forces.

Netanyahu has already announced at during the summer, that he is now in favour of a “two State solution”. And Ehud Barak has always said this is his vision. The Americans under Obama are avidly seeking the "Two State Solution".

So the way I read it is that Netanyahu and Barak, in conjunction with Obama, have plans to withdraw troops, demolish Jewish homes, either unilaterally or as part of a “Peace” agreement, during 2010 – and both Netanyahu and Barak are therefore preparing their forces.

Neither of these steps would be required for any planned military campaign against our external enemies.

Both will be required to carry through a major anti-settlement withdrawal program during 2010 – a la Gush Katif, or even much larger.