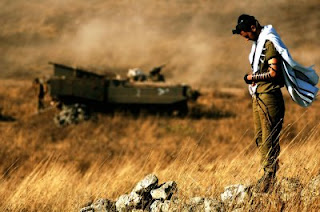 Over 25% of combat troops in the Israel Defence Forces are now National Religious (Dati Leumi).

Many of these participate in the Hesder Yeshiva program, which was established in 1953 by the Keren BeYavne Yeshiva. The Hesder program typically last five years, of which some 16 months is army training and active service, while the remainder is spent in religious studies in over 40 yeshivot around the country.

On the one hand, this program is the flag-ship of the National Religious camp – combining torah studies with fulfilling the practical mitzva of defending the Jewish people and the Jewish State – paid for by the Ministry of Defence.

On the other hand, many of the Army's finest and most motivated troops are from the Dati Leumi camp in general, and from the Hesder Yeshivot in particular. Israel's military cemeteries attest to the awesome heroism of so many of of these young men in the battlefield. And the most astounding kidush Hashem.

It is a proven win-win project both for the Israeli Army, and for the National Religious movement..

However, the recent head-line-grabbing clash between Defence Minister Ehud Barak and Rabbi Eliezer Melamed, Rosh Yeshiva of the Har Bracha Hesder Yeshiva, pits the doctrine of military discipline against the authority of the Torah and Rabbonim. The dispute seems to be about whether soldiers can protest evacuating some small outposts which have been deemed as illegal by the Israeli Government.

This issue of 'refusal' was much debated prior to and following the Gush Katif evacuation. The Dati Leumi almost unanimously held that the destruction & evacuation of Jewish settlements in the Gaza Strip and retreat of the IDF to be forbidden by halacha and (in addition) politically and strategically against the interests of the State of Israel. The question then was therefore "Should Soldiers Refuse Orders to Evacuate Gush Katif?".

The bottom line was that, regardless of the stated opinions of some rabbonim calling for troops to refuse orders, almost no soldiers actually refused to implement the evacuation orders at Gush Katif. Even the religious soldiers turned out for duty, and even dragged their own families and friends from the homes and synagogues.

Most Israelis agree that the rabbis' grim assessment of the Gush Katif evacuation proved accurate - even an understatement of the disasterous results of the Gush Katif evacuation. With 9000 residents still (four and a half years later) without replacement homes, a social welfare disaster, the Coup D'Etat which brought Hamas to power in Gaza, and the subsequent raining of missiles into Israeli cities - there is little doubt that Gush Katif was a gastly strategic mistake.

However, this does not mean that there is more support today for the idea that troops should have disobeyed orders. Anyone acquainted with the Israeli Army will recognise that its strength against our enemies is dependent upon the shared commitment of its soldiers, including a commitment to carry out orders - however stupid or inappropriate the soldier may, individually, think these orders are.

With the current Israeli Government having openly called for the establishment of a Palestinian State, and now frozen all new building in the whole of Yehuda and Shomron (West Bank) except East Jerusalem for the next ten months, it should be assumed that Ehud Barak (a strong proponent of a "Peace" Agreement with a Palestinian State) is preparing for the next show-down.

Any "Peace" Agreement envisaged would require the Israeli Government to evacuate many Jewish towns and villages. Probably far more than the Gush Katif evacuation (9000 people).

Arguably around 100,000 residents of Yehuda and Shomron would need to be forcibly moved into pre-1949 .

The Army will be ordered to implement this mission.

Although apparently this dispute between Ehud Barak and Rav Eliezer Melamed is over a soldier's right to wave a protest banner against destroying small-time outposts, this is merely the pretext.

Barak is now making sure that, when (chas veshalom) the Government signs on those orders for the evacuation of Yehuda, Shomron, the Golan...who knows where else... the Army will deliver the goods, without protest, and without insubordination.

Rav Melamed is sticking to his principles, and therefore threatening the larger Mission.

The question is, if the price of this would be the Hesder Yeshiva Program itself, who would be willing to pay it?