Tropper-Gate and Who’s Afraid of the Big Bad Blog? 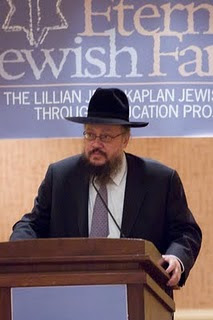 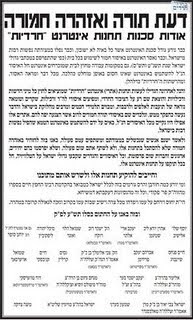 A group of leading Chareidi Rabbonim have recently specifically banned Chareidi blogs and forums. (see above notice). It seemed odd when this poster went up around town, because these rabbonim had already banned the use of the internet itself. So what's this with the chareidi blogs?

Sure enough, under pressure from this latest sub-ban, several erstwhile chareidi internet sites have apparently now closed down. Although the majority have simply ignored it.

For those who like to link the dots (such as Frum Follies), in order to see a more complete picture, you can note that the Rabbi Leib Tropper conversion-for-sex scandal was breaking simultaneously to the issuing of this rabbinical decree against chareidi internet sites.

The Rabbi Tropper tapes of sexually intimate discussions were initially sent, presumably by Shannon Orand, the blonde in-process-convert, to these self-same chareidi blogs, for onward distribution.

Shutting up the blogs may have been a ruse to shut up the Tropper scandal.

The rabbis who signed the sub-ban on chareidi blogs include no less than ten of the same rabbis who signed up on the haskama for Rabbi Tropper’s Eternal Jewish Family conversion agency. (see http://www.eternaljewishfamily.org/images/uploads/proc.pdf )

Even if you’re not the conspiracy sort, the Agudas Yisrael organization itself was clearly behind both the anti-blog cherem and EJF.

If these two simultaneous events - the exposure of Rabbi Tropper and the call to shut down the blogs - were indeed intentionally linked, then, rather like the original –Gate scandal, an attempted cynical cover-up by the Agudah of Rabbi Tropper’s indiscretions (an affair which is becoming known as Tropper-Gate on the blogs they tried to shut down), may become an even bigger scandal than the scandal itself.

P.S. For those with longer memories, the same team who brought us the Blog Ban and the Eternal Jewish Family, also brought us the cherem on Rabbi Natan Slifkin's scholarly books about science and Judaism. That cherem was initiated by none other than Rabbi Tropper himself, and backed by the 'usual signatories'.

More about that angle on Rabbi Slifkin's blog . Perhaps Rabbi Tropper's own blog (what?!) had Rabbi Troppers response to R.Slifkin's article.

It's hard to tell, as Rabbi Tropper's blog seems to have been removed.

So I suppose the Blog Cherem was at least partially effective.