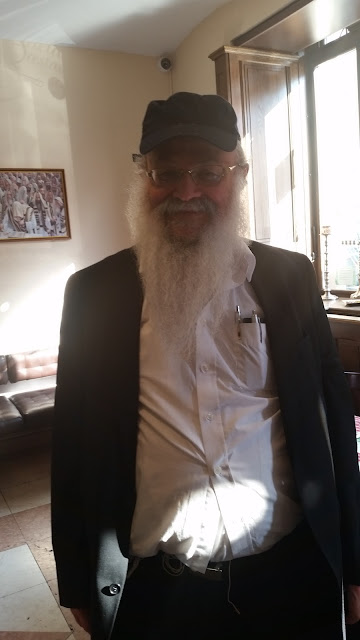 Whether or not to look Jewish is a big issue when travelling abroad - particularly with concerns of antisemitism in Europe and Israel-phobia throughout the world.

On a visit to Prague, Czech Republic, last week, I again revisited this topic.

Many of the Jewish travelers I met there, were wearing baseball caps. This in an effort to keep their Jewish identity low-profile. I attach a photo of one such gentleman who kindly agreed to pose.

I noticed that almost none of the genuine gentiles in Prague were wearing baseball hats.

And those occasional fellows who did, did not wear formal black trousers, shirts, etc - but rather shorts and tee shirts, with their caps.

In short, there is probably no surer sign that someone is Jewish while abroad, than the now ubiquitous 'Jewish' hat - the baseball cap.

I further reasoned that any reasonably informed antisemite, would know that.

Furthermore, any well-intentioned casual passers-by, who may recognise a kippa as a distinctive Jew identifier,would probably NOT recognise the baseball cap as such.

So imagine the following scenarios:

Jewish Chap 1 is abroad and, in an attempt to look like a gentile, wears his baseball cap.
Regretfully, the nightmare comes true, and he is set upon by antisemites. Bystanders assume it is a common brawl going on, and keep well away.

Jewish Chap 2 is also abroad, and proudly and openly Jewish, wears his kippa. Unfortunately, he too is set upon by Jew-hating thugs. However, instantly recognising this is a racist attack, onlookers quickly intervene to save the Jewish victim. (Yes, I do believe there are many regular gentiles in Europe who would do this).

QED - if you want to be safe and also cover your head while abroad - I recommend wearing a kippa, not a baseball cap!