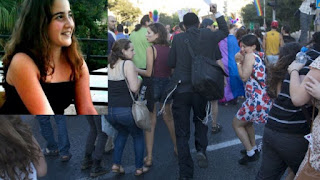 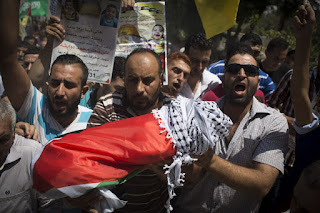 The two blood-chilling murders of the past days, the murder 16 year old Shira Banki by knife-wielding Yishai Schlissel, and the burning to death of one-and-a-half year old Ali Dawabsha, have evoked repugnance and horror in the Israeli public.

The Cabinet has reportedly issued decrees enabling the security services to use anti-terror imprisonment and torture methods against Jewish terrorists.

These policies, which are no longer used against Arab terror suspects, due to the intervention of the Supreme Court, include the ability of the police to retain and hold suspects without trial, charging and access to lawyers, for unlimited periods; torture methods reportedly include "shaking" which was permitted by the 1987 Landau Commission in cases of "ticking bomb"scenarios, but rarely used in practice due to objections from the legal system and human rights groups.

Arrests of right-wing activists have already started with Meir Ettinger being arrested for suspected involvement in a Jewish terror group.

It is worthwhile noting that, although the Guy Parade in Jerusalem is undoubtedly offensive and provocative to many orthodeox residents, it is grossly unfair to generalise to "Chareidim" as a collective group, from the repeat acts of Yishai Schlissel, an individual who had recently finished his 10 year sentence for a similar stabbing attack on a Gay Parade in 2005.

If there are heads to roll, aside from his, perhaps these should be in the legal process and prison services, who released Schlissel, this truly "ticking bomb" to again endanger the public and tragically shed blood.

The arson attack in the village of Duma, reportedly showed commonality with other "price tag" attacks, chiefly the scrawling of Hebrew graffiti on a wall.

According to reports, the Dawabsha's house was located deep within the sprawling village of Duma and was one of two buildings which were firebombed; not an easy target for Jewish infiltrators into a hostile village. The connection of the grafitti to the arson is circumstantial, and such price-tag-style grafitti is notoriously subject to forgery, including by Arabs to re-frame internecine violence (which is unfortunately a very widespread phenomenon) as "Jewish terrorism" (which fortunately is very rare).

Jews may indeed have been involved in the grisly murder; I don't know one way or the other.

The 'facts' (1+1=2) as laid out instantly by the Palestinians, the press, Israel's police and politicians, should be subjected to thorough forensic verification.

Particularly before using this case as the grounds to introduce far-reaching policies and measures which may rapidly develop into a witch-hunt, such as was launched subsequent to the Rabin assassination.

Schlissel needs to be locked up so that he never endangers the public again - probably for the rest of his life. That closes the case of the Gay Parade stabbing. No further generalisations and new policies are required.

And whoever murdered Ali Dawabsha should be found, arrested, tried and sentenced for their vile crime. As indeed happened in the case of Mohammed Abu Khdeir, the Palestinian youth who was abducted, murdered and burnt in the Jersualem forest.

That is far short of justifying the extreme policy changes that politicians are introducing as their knee-jerk populist responses to these horrific acts.