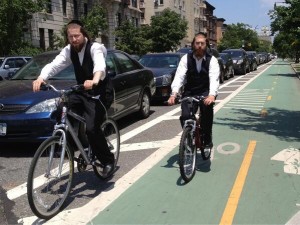 According to Galei Tzahal/Army Radio Station, the new fight in the Jerusalem City Council is about a proposed bicycle renting project, to enable people to conveniently pick-up and drop-off bicycles.

The program offers many benefits, including reducing the number of cars on the roads, maximising parking spaces, and providing an alternative to public transport, particularly during crunch rush-hours.

For the users, it's healthy, green and low-cost.

These projects work well in many cities around the world; I recently enjoyed a visit to Toulouse, where I utilised the municipal bicycle rental program to get around the city.

There is also such a successful project in Tel Aviv.

In Jerusalem, like many other city programs, it has now become a chareidi vs secular issue.

Apparently, Chareidi representatives on the City Council are objecting because they believe this will cause Shabbat desecration.

I can see that in areas which are closed to car traffic on shabbat, the prospect of secular Israelis cycling through the neighborhood on shabbat could raise eye-brows, particularly if they are not dressed modestly.

So of course could the prospect of secular Israelis walking through a closed chareidi neighborhood.

The difference, I guess, is that the cycling also raises issues of forbidden activities on Shabbat.

This is due to a rabbinical ruling, based on the following concerns (from Chabad):

1) It is prohibited to carry objects in a public domain on Shabbat. Transporting an object by riding it is tantamount to carrying it.

2) Fixing a device on Shabbat is prohibited. If the bicycle breaks down, for example if the chain falls off, there is concern that the rider may fix it.

3) Riding a bike is considered a mundane weekday activity, one that we refrain from on Shabbat.

In Jerusalem, the first concern is not relevant, as the city has an Eiruv, and so carrying is permitted on Shabbat.

There is some controversy about the second reason, with the Ben Ish Chai, Rav Hildsheimer and Rav Ovadia Yosef among the rabbinical authorities who challenge it.

However, the bottom line is that orthodox Jews don't ride bicycles on Shabbat. And so someone riding a bicycle through an exclusively orthodox neighbourhood, could be offensive.

However, I don't see that whether a secular Jew rides a bicycle on shabbat, is the rightful business of Chareidi representatives on the Jerusalem City Council.

I suggest that, given the many benefits to all residents of the city of this program, that those bicycle routes which go through closed orthodox streets, be closed on shabbat.