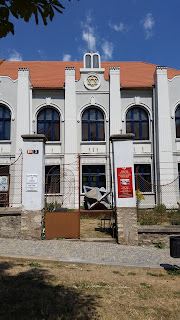 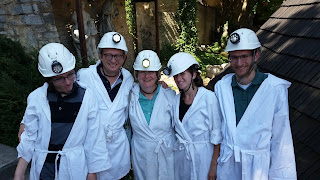 We headed off the beaten path during a family vacation in the Czech Republic, having rented a car, and we went to Kutna Hora, about an hour's drive East from Prague.

Kutna Hora is a picturesque small town which achieved prominence during the middle ages and until the 16th Century, due to its (then) rich silver mines and associated industries, such as a Mint (which continued for several centuries after the silver mines were abandoned).

The Silver Museum in the town includes the option of dressing up in sort-of miner's gear and then going through shafts and tunnels of the ancient mines. It felt a bit like Hezekiah's tunnel in King David's City, Jerusalem, just without the water. 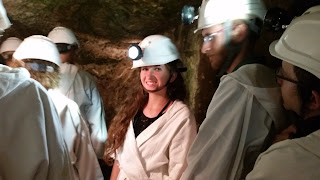 We found an information leaflet in the museum about a new exhibition at the town's synagogue, a five minute walk away.

Our tour guide was a boy (I guess 17), called David who spoke some English. When I asked him, he said that his grandmother on his father's side was Jewish.

The synagogue is currently used as an active Church, adorned (as my son pointed out) with a large picture of a Jewish person (being crucified), and so we didn't go into the main sanctuary.

David kindly obliged by taking photos of the main exhibits in the exhibition, and then explained them to us and answered our questions. 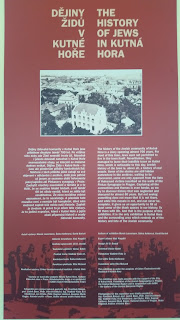 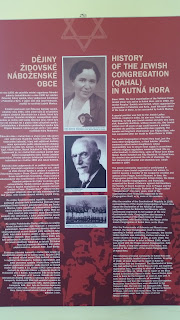 The story is that Jews were only permitted, during the main period of Kutna Hora's silver-boom in the Middle Ages, to be employed in limited tasks and professions. Along with being excluded from many trades, Jews were also forbidden to live in the town itself.

The Jews therefore lived in surrounding villages where they built synagogues, schools and communal facilities, and traveled in to the town to work.

This synagogue was relatively recently built (19th Century), and was actively used until the deportation in the summer of 1942 to Therezinstadt and the subsequent murder of all but 15 of the 110 Jewish inhabitants of Hutna Hora. Their names are recorded on the walls of the Pinkas Synagogue in Prague, along with around 77,000 names of their fellow Czech Jews who also were murdered by the Nazis.
There was apparently one Jewish woman who lived in the town until she recently passed away. There are no known Jews living in the town today.

The modest Jewish museum was opened this year.