The Silver Half Dollars in the Matanot Le'evionim 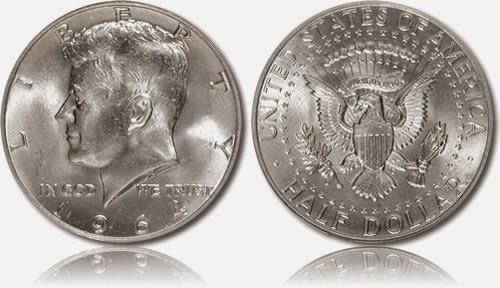 Today, Purim, I was handed a pile of American half-dollars by a donor, was was keen to contribute to the Lema'an Achai Matanot Le'evionim (charity for the poor) campaign.

As I'm a Brit, who has spent the past quarter century in Israel, I found these coins unusual and fascinating.

I asked the donor how much they are worth, and he said he reckoned they are worth exactly half a dollar each. As per their denomination value.

A small crowd of fellows gathered around us to inspect the coins, while offering various opinions about their silver content.

Aside from the donor, no-one else seemed to think they were solely worth their nominal half dollar.

We therefore reached for the wonders of google...there, in the shul, on my cellphone.

These half-dollar coins were produced in memory of the assassinated president, just three months after JFK's tragic death, prematurely replacing the Lincoln Half Dollar, which had been minted since 1948 and had been planned to run for a further decade.

As literally hundreds of millions of these coins were minted, they apparently have no scarcity value. And, as our coins are in 'used' condition, they are not of interest to collectors.

For those interested in economics, due to the effects of inflation, the buying power of these half-dollar coins back in 1964, half a century ago, was the equivalent of around $3.50 today (x 7).

Their current silver value is therefore around $6 for the 1964 Half-Dollars, and around $3 for the newer version.

I asked the donor if he would like to reconsider his donation, as it had been rather more generous than he had intended?

He explained that he was in the process of cleaning out unwanted stuff from his apartment, and had found the American money. His objective in giving it for Lema'an Achai's Matanot Le'evionim, was to benefit the poor, to the largest extent he could afford.

He said he was delighted to go through with the donation - particularly as this would benefit needy families even more.

(If you would like to make a generous bid to buy these historically fascinating silver half-dollar coins from Lema'an Achai, please contact me off-line! Consider a pidyan haben, or mechatzit hashekel, etc).