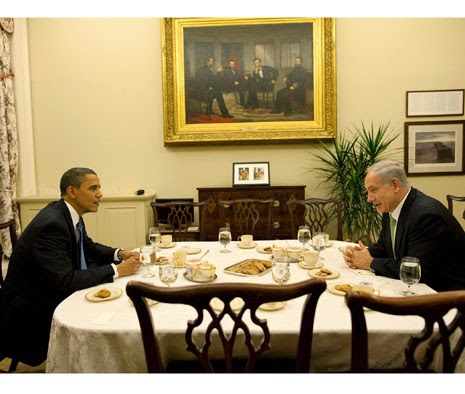 There is universal concern in Israel about the current nose-dive in Israel's relationship with the Obama Administration.

Although Obama has often pledge that he "has Israel's back" it now seems that this means to plant a knife in it.

The USA has taken on a critical role in helping protect Israel by both Military and Political means.

There does not seem a likelihood of Obama cutting defense aid to Israel, currently around $2 Billion/a - if for no other reason than he would need Congressional support to do this, which he won't get.

So the current weapon of choice for Obama to 'punish' Netanyahu for his election victory (or, Obama would argue, for the statements Netanyahu made in order to win the votes) is political - initially at the UN.

The USA has protected Israel's back at the UN for decades - often Israel's only and certainly most important supporter in this historically anti-semitic institution.

Whereas motions are regularly passed at the UN, condemning Israel, these have not had teeth.

Motions with real teeth, such as sanctions, require unanimous Security Council backing; the USA has automatically vetoed anti-Israeli motions which reached the UN Security Council. This is the achiles heel for Israel.

If the USA supports, or does not use its veto, on UN Security Council anti-Israel motions, then a motion to recognise a Palestinian State within 1967 borders, for example, with sanctions, can be extremely damaging for Israel.

The threat or imposition of UN Sanctions are not to be treated lightly - the Iranian economy has been severely damaged by such sanctions, as was South Africa's many years before.

The prospect of Israel becoming a pariah State is a direct threat on Israel's economy, defence (ie existence) and Israel's international standing.

With two years still left to Obama's administration, the future looks very rocky - as the leader of the democratic world seeks to impose sanctions on Netanyahu for winning the only democratic elections in the Middle East.