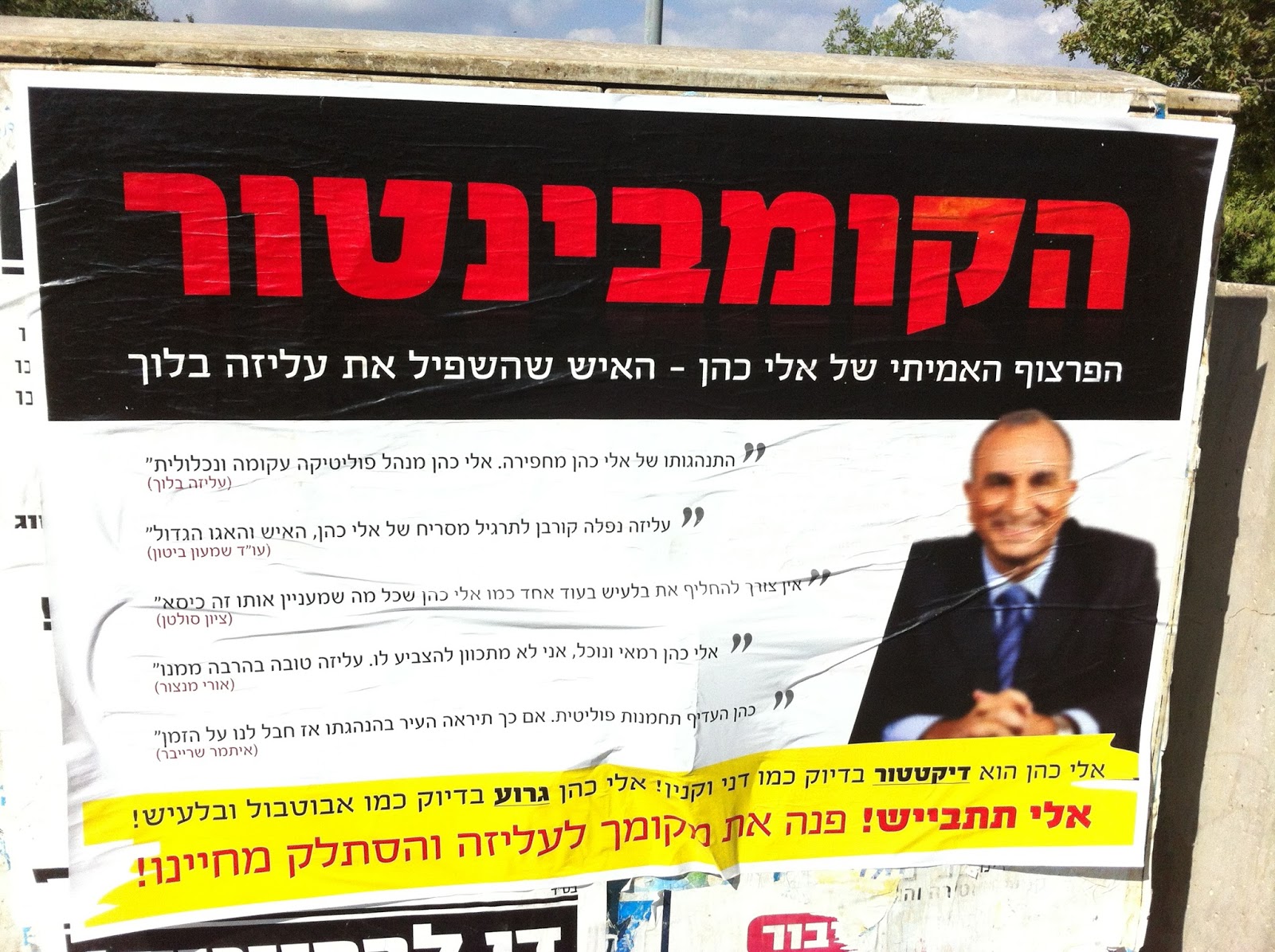 A few weeks ago I wrote about an innovative and progressive approach to politics in Beit Shemesh.

Here's an update about how that process went.

Appreciating the self-defeating results of a split vote, the five contenders against incumbent mayor Moshe Abutbul, agreed to hold a telephone poll. The strongest candidate in the poll would be the sole candidate to face Abutbul in the municipal elections on 22nd October.

Phase One of the project went fairly smoothly, with most of the candidates linking up behind either Eli Cohen or the relatively late-entry Aliza Bloch. The sole exception was Meir Balayish, who broke ranks and continues to run as a candidate for mayor.

Eli Cohen was running as an independent, stressing 'professionalism' and his impressive management CV.
Aliza had the backing of the political parties, including Bayit Hayehudi, Likud and Yesh Atid - the same triumvirate which is the ruling coalition in Israel.

On to Phase Two. The poll.

The public enthusiasm for the polling process was palpable; the telephone poll was due to asks 1000 families for their voting preference. The poll finally got off the ground on Wednesday, 7th August and was due to take place over two days.

I indeed received a call on Wednesday evening, asking me a series of general questions (where am I from, who did I vote for in the national election, my age, etc) before getting down to the tachlis question - which candidate would I vote for - Eli Cohen or Aliza Bloch? I replied Eli, and enjoyed the feeling that I was participating in a cleaner political process in Beit Shemesh, whoever won.

However, as I was talking to the pollster, while receiving an automated phone call from Bayit Hayehudi leader Naftali Bennett telling me I should vote Aliza Bloch...bigger things were happening in Tel Aviv.

The agreement stated that Aliza would be Eli Cohen's number two on his list of candidates for City Council.

The poll was stopped, as the results were no longer relevant.

The only problem was that Aliza wasn't at the signing; indeed she later announced the process had not included her, and that she had been 'stabbed in the back'.

In the PR mopping-up exercise, Eli explained to impassioned public meetings that he saw a coalition of forces via mutual agreement as an improvement upon the phone-polling process, as the result would be unifying, rather than a winner-loser relationship.

Aliza went quiet for several days - giving the impression she was personally hurt and now sulking. At the end of last week she issued a statement saying she was withdrawing her candidacy for mayor. She did not address whether she would take up Eli on his number-two-slot offer.

While I understand that many members of the public were disappointed to be all psyched up for a race which never happened - the larger picture is that the zionist public got what they wanted.

One strong contender against Moshe Abutbul.

Israeli politics is characterised by enthusiastic popular participation in democratic process, which is then immediately rendered redundant by back-room deals between parties.

I voted for Bayit Hayehudi in the national elections - and got a building freeze in Jerusalem, a wimpy line on a nuclear Iran, US sponsored Palestinian peace talks, and wholesale terrorist releases.

The relationship between my vote and national policy is very remote.

Yes - backroom deals should stay in the backroom - as the public doesn't generally have the stomach for them.

In the front room window display, we have the ideal principles of democracy and just representation.

Here in Beit Shemesh, the window display was, for a moment, the backroom.

Disappointing to those who thought we're broaching new ground - but otherwise politics as usual.

Those who don't have the stomach, such as Aliza Bloch (with all respect), are better off doing something else for a living.