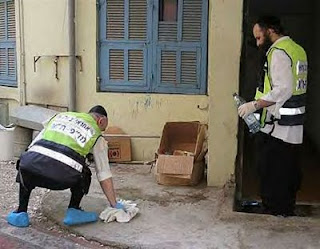 Do you recall Yiftah Mor-Yosef, the 17 year old boy in Ramle who was shot in the crossfire between gangsters, while sitting on a park bench?

Or Leorard Karp, the man murdered by a bunch of kids while relaxing with his family on the Tel Aviv beach?

Or Nir Katz, from Givatayim, and Liz Trubeshi, 17, from who were murdered in a gun attack on their gay counseling center in Tel Aviv?

Or Beatrice and Denise Rodov, the mother and daughter found cut into pieces, limb by limb, and dumped in the Alexander River (one) and in a garbage can in Ramat Gan (the other)?

Or Tzipora Nahamu the landlady, who was stabbed to death by her tenant?

One gets the feeling that common murder of Israelis by Israelis has taken over this summer where Palestinian terrorism has left off.

Bellicose statements have been made in the Press and by politicians, blaming the police, poor education, the orthodox (for the gay murder), whatever, for the pervasive feeling in Israel that it is no longer safe to walk the streets, day or night.

On the other hand, the statistics do not seem to indicate there is objective cause for panic, or even concern.

Wikipedia lists as way down the list of countries for rate of homicides. With a world average of 7.6 murders per 100,000, looks pretty safe at 1.87 murders per 100,000. http://en.wikipedia.org/wiki/List_of_countries_by_intentional_homicide_rate

And the under-way Cities Without Crime (CWC) program in twelve Israeli cities has been declared a success. For example, Ramle (see above) has reportedly experienced a 40 percent drop in violent incidents from 2007 to 2008. http://www.jpost.com/servlet/Satellite?cid=1249418651666&pagename=JPost%2FJPArticle%2FShowFull

I am no criminologist, but the silver lining to the tragic chain of gruesome murders this summer is that it might, just might, provoke long-needed changes in cultural and behavioral norms. Statistically justified, or not.

Simply drive down the Tel Aviv/Jerusalem highway, and you will have numerous near-death experiences…. Reckless drivers and near misses are so much part of our mundane driving experience, we barely notice.

Take someone's parking space, and you will come closer to death than a face-to-face with a viper.

Skip a line at the post office, and receive threats and curses which make your hair stand on end.

There is naught-to-a-hundred pace of Israelis losing their tempers, that is appalling at any time, but can apparently spill over into actual bloody murder in too many cases.

If the country finally takes a decision to work on our derech eretz (there's an ironic term....) now, less innocent Israeli blood will be spilled tomorrow.