Who Pays The Teacher? 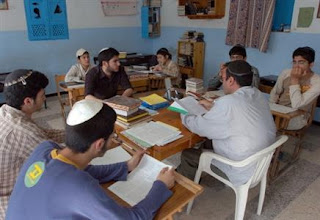 When my friend Y , his wife and four young children hit the aliya reception area of , they knew that their real journey had just begun. But even their most dire expectations of grueling times ahead, proved to be optimistic.

The language would be a problem, for sure. School age kids were going to have to adapt incredibly (impossibly?) quickly to avoid integration and educational problems. Socially, they would have to all find their new niches in Ramat Bet Shemesh. Culturally – they knew the feather-bed landing of a large anglo-community would still necessitate struggles with "real" Israelis and the local bureaucracy.

But at least the money and career would be fine. Because Y was starting work that very next Sunday at his pre-arranged, senior job position at a prestigious independent educational organization.

And sure enough, the plans were implemented, and the kids struggled valiantly with the language, new schools, new friends. The family settled in quickly, and enjoyed their new neighbors, shul and community.

Y's job worked out well – he was well appreciated by the students and by the staff. He is a talented educator, inspiring and innovative. Y came home late each night, satisfied that he was giving his all to this new job – and was doing well.

The ONLY problem was the monthly paycheck.

Every month, Y would enquire with the Financial Officer of the institution he taught when his paycheck/s would be arriving, and was reassured that, although the institution indeed had some financial problems, he should not worry.

But not a single check ever arrived. And he had no choice but to worry.

At a loss at what to do, Y tendered his resignation. And, with empty pockets, and deep despondency, went job searching.

As Y packed up his books from the staff-room, he delicately told his colleagues what had happened and why he was forced to leave his position.

Y was shocked when his erstwhile friends and colleagues said "we're not surprised, Y."

"With all respect, Y, we thought you must be crazy to take the job in the first place. All your predecessors left for the same reason. Not one of them ever got paid."

Sometimes, these are simply the result of misfortune or incompetence – the employer took on the employee in good faith, but the facts on the ground changed unpredictably, and now the business can no longer afford the salary bill.

But much of the time it is systematic. Even when the employee was taken on, the employer had no intention to pay them their dues. The employee can become duped, threatened or tempted into continuing working, delivering services, for remarkable periods of time; allowing the employer to abuse the employee, to make ill-gotten, illegal and immoral profits. Be'Shitta. Systematically.

People who work "unofficially" (off-the-books, blackmarket, whatever) are the most prone to being abused – however even they DO have rights under the law.

Today, with the employment situation in reaching crisis proportion, the lack of a fall-back employment option, leaves many workers - even in high-tech - exposed to being exploited or abused by their current employer. "Accept worse conditions than we agreed, or go take a hike".

As with all abuse, the first weapon to avoid being abused is education & information.

If you live in Ramat Bet Shemesh, and want to know more about your employment rights, call Lema'an Achai's "Rights & Advocacy Center" - 9991553, ask for Meir Jaffe.