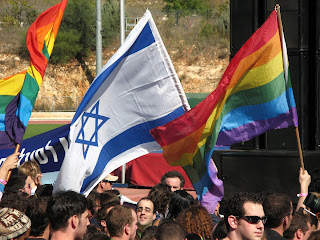 Israeli police are hunting for a gunman who shot dead two people in an attack on a support centre for homosexual teenagers in Tev Aviv.

…..Homosexual activists and some politicians were quick to condemn what they called an atmosphere of incitement by elements in Israel's religious and specifically ultra-Orthodox society, including the Shas political party.

At a demonstration through the streets of Tel Aviv immediately following the attack, hundreds of protesters marched and carried banners accusing Shas of incitement.

The horror of the recent shooting attack upon Jewish youths in Tel Aviv, gathered at a Gay support center, has evoked outrage across the spectrum.

The theory that this attack was perpetrated by chareidim is, frankly, an emotional & hysterical response, rather than a logical one.

It is true that chareidim and homosexuals are somewhat like oil and water, as the Torah explicitly forbids the practice of homosexuality, and therefore the two groups cannot happily coalesce.

However, there is a huge gap between the religious strictures against homosexuality, and someone murdering two Jewish homosexual youths in a spray of bullets.

There is absolutely no precedent for chareidim expressing dissent in this way – and indeed it would go against other precepts Torah observant Jews adhere to; the same Torah which forbids the practice of homosexuality also, most obviously, forbids murder.

Furthermore, although details of the investigation are under wraps, this support center was apparently not a well known location – not an advertised, neon-lit Gay hang-out, bar, or club, but a discrete location for gays in distress to meet peers and obtain confidential support services.

In the unthinkable circumstance that a religious zealot was out to kill homosexuals, then this hidden support center would be an unlikely target.

The chances that it was a perpetrated by someone with a personal grievance against this particular center, is far more logical - if less politically compelling for the Gay community - than a chareidi attack.

The targeted murderous attack upon Jewish youth, is so appalling that there is universal consensus and outrage in Israel.