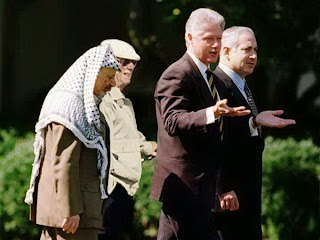 "Today," Netanyahu said, "is the day uprooted approximately 10,000 Israelis - men, women and children - from their homes. To our regret, has become a base for Hamas-led, Iran-sponsored terrorism. Thousands of rockets and missiles have been fired at us." (Binyamin Netanyahu, August 2009, who voted in favor of the "Disengagement" from in 2005)

Olmert has already said that his convergence plan, which called for a unilateral pullout from most of the West Bank, has been shelved, and he has described the withdrawals from Lebanon and the Gaza Strip as failures. (9/1/07)

To this day, the architects of the Oslo Accords (chiefly Peres & Beilin) between the State of Israel and Yasser Arafat's PLO, have not admitted the disaster they directly brought upon Israel, nor have they publicly acknowledged that over 1000 Israeli civilians died in the terror which resulted from their bad leadership.

Every Prime Minister I recall has been investigated for minor corruption while they are still in office. Barak's "straw NPOs" which were alleged to have gotten around election finance regulations; Netanyahu (first time around) was accused of accepting personal gifts from visiting dignitaries, rather than hand them over to the State vaults (remember the cigars?); Sharon was accused of financial irregularities relating to election expenses; Olmert resigned due to the stacking-up of files against him involving jobs-for-the-boys, and favour swapping, and non-declaration of cash donations.

These cases took up large chunks of these Prime Ministers time – and must have been a drain upon their personal resources & abilities to govern.

However, the catastrophic failures of the Oslo Accords (two intifadas costing over 1000 Israeli victims), of the Lebanon withdrawal (which necessitated the Second Lebanon War), the Disengagement from Gaza (which established Hamas and their missiles in Gaza) and the Second Lebanon War (which reduced Israel's deterrence to its lowest point in decades, and directly cost over 100 Israeli deaths) – left all those leaders guilty of gross negligence still holding the reins of power in Israel.

However, if he recklessly or negligently leads the country into disaster, he will face charges in court with severe penalties. As with any other professional – full liability.