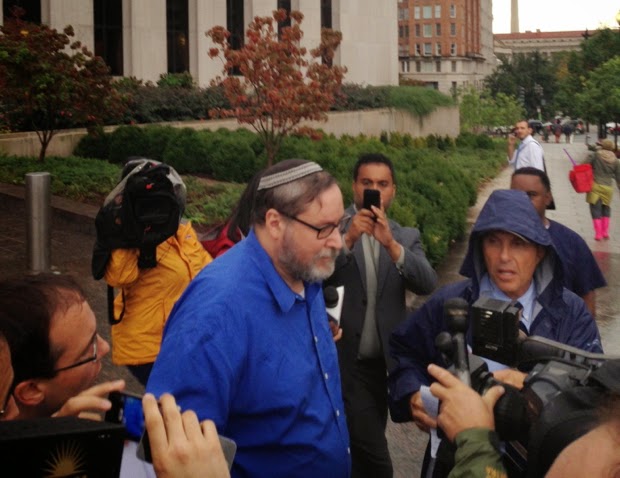 The charges against Rabbi Barry Freundel, a highly respected senior rabbi based in Washington DC, have resulted in shock throughout the Jewish world, and have also been widely reported in the regular non-Jewish media.

Rabbi Freundel is accused of voyeurism, specifically, videoing women in the showers of  a mikve located next door to his synagogue.

Voyeurism is an ancient sin, and a recent crime.

Peeping Tom was the boy who watched the legendary Lady Godiva ride naked on her horse through the streets of Coventry - and his name has entered the English language as a descriptive term for anyone who watches unwitting people for sexual gratification.

Some voyeuristic behaviour is included as a mental disorder, paraphilia, under The American Psychiatric Association DSM-4 codification.

Voyeurism, as a practice rather than an illness, is reportedly incredibly common among the general population, with close to half of males admitting to having viewed non-consenting parties for their own gratification.

As far as the law is concerned, legislation defining voyeurism as a crime is generally very recent and, as crimes go, fairly minor. It is often considered as a public nuisance, rather than a sexual assault.

In the UK, it was criminalized in 2004; only 9 Status in the USA currently list video voyeurism as an offense; in Canada, legislation against voyeurs was passed in 2005.

The defining case in the UK was R vs Turner (2006), and is parallel to the Rabbi Freundel charges. Mr Turner ran a sports club, where he placed hidden cameras in the showers. He viewed them himself, but did not distribute the imagery further. Turner was sentenced to 9 months imprisonment.

Given all of the above, it may seem surprising that the Freundel cases has attracted so much media attention and public disgust.

If the Rabbi had been found to be, say, watching pornography (ie the other party was consensual), then he may have been highly embarrassed, perhaps even lost his job. However, there would have been no public outcry.

The shock is the combination of the fact that it was a women's mikva, a most private and sacred location and ritual, and Rabbi Freundel's position as a senior rabbi, including governing and conducting conversions to Judaism, of which immersion in the mikva is the defining moment of the conversion itself.

In the post-Tropper era, the combination of conversion into Judaism, and the sexual exploitation (in this case, voyeurism) of converting and therefore vulnerable women, is particularly harrowing, traumatic and shameful.

That the rabbi was allegedly cynically exploiting these most private, intimate and spiritual moments for his personal gratification, was a violation not solely of his rabbinic status, but of the mikve and all it symbolises - and a violation of Jewishness itself.

And most of all, it was an alleged violation of those unsuspecting, trusting women.