By Doug Greener (with kind permission)

[DM: I am a fan of Kevin Unger, and I love his beers! You can order his prize-winning home brewed beers directly from Kevin on Nachal Dolev, Ramat Beit Shemesh - 052-3826751]

Every commercial craft brewer I've spoken to started out as a home-brewer. At some stage, they got the courage, went through the bureaucracy, and broke out into the world of business. 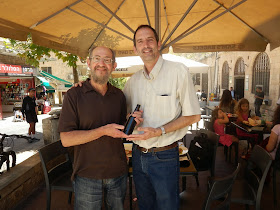 Your happy beer blogger with Kevin Unger (right)
and his (as yet) unnamed and unlabeled beer.


Kevin Unger of Beit Shemesh is right at this cusp. Every Thursday night, he and his brewing partner Betzalel brew two batches of 18 liters each in his kitchen. About half of the beer is sold to neighbors and fans. The other half Kevin and Betzalel drink with family and friends.

"I started home-brewing so that I could drink for cheaper than the price of commercial beer -- and get better beer at the same time," explains Unger. "Now, I'm drinking great beer for free."

One of the batches is always their "flagship" beer -- Whisky Chips -- made with oak chips soaked in whiskey. "This is always a big hit," says Unger. "Sold out as soon as I bottle it."

The second batch is a rotation of the three other styles he brews: 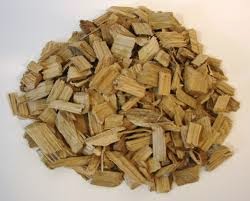 The Whisky Chips Ale pours a cloudy reddish color with almost no head, and it has a slightly sweet aroma. When I tasted it, I understood why it's so popular. No taste is overwhelming. This is not a beer for those who like powerful, one-dimensional flavors in any direction. It's for the majority who prefer a rich, smooth and gentle beer (just 5.5% ABV) -- even in the aftertaste. Maybe it's the oak chips. After all, aging in oak makes whisky and wine "mellow." Even though I've never heard a beer termed mellow, maybe that's what the oak chips do. It is indeed a pleasurable beer.

I also tried Unger's India Dark Ale. It couldn't be more different. It looks like Israeli non-alcoholic "black beer" in the glass. The aroma brings to mind an India pale ale with nice, spicy hops -- but it's also sweet and yeasty, the result of Unger using roasted barley malt instead of pale. On your tongue, the hops add bitterness rather than flavor. Some would say that the taste is on the way to a stout, with other notes of cream. The alcohol percentage is 6%, fitting for any India-style ale, pale or dark.

Recently, the fame of Unger's beers reached potential investors who are prepared to bankroll his expansion into commercial brewing.

"We're checking into the matter now," says Unger. "We want to be sure that our beer has a chance to succeed with all the other craft beers on the market." 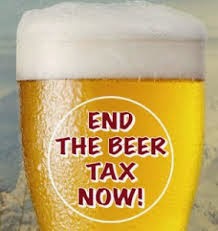 One of the problems Unger sees is Israel's high tax on beer. "This is hurting the sales of all the micro-breweries. It puts them at a very serious disadvantage against the country's industrial brewers and the cheap beer imports that are flooding Israel."

Unger has decided to take an active role in trying to lower the tax on craft beer in particular, although he admits it's an uphill battle. "The government makes a lot of money on the alcohol tax," he says, "and they'll resist any change."

Still, around two months ago, Unger initiated a meeting with American-born Knesset Member Rabbi Dov Lipman, to try to convince him of the need for reforming the alcohol tax.

"He was very receptive," Unger reveals. "He asked me to prepare a paper on why the tax should be lowered or repealed, and promised to deliver it personally to the deputy minister of finance. 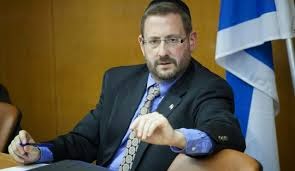 MK Rabbi Dov Lipman:
Giving beer a chance.
Unger explained to MK Lipman how the tax on craft beer was stunting the growth of this infant industry, which has the potential for providing jobs to hundreds of people.

He also addressed the government's policy of combating alcohol-related violence among youth.

"I told Rabbi Lipman that the kids who drink and get violent don't do it with craft beer. You would
have to drink a lot of beer to get in that state. No, they buy a bottle of cheap vodka or something and finish that. Craft beer is definitely not a part of the alcohol problem among youth."

Unger knows of what he speaks. He is a youth counselor and substance abuse professional working with English-speaking youth at risk in Beit Shemesh. He works almost daily with people who have alcohol and drug related problems, and can speak with complete authority on the subject. When he says craft beer is not a part of the problem, the argument should be over.

This is perhaps the main reason why Dov Lipman agreed to follow through with Unger's appeal for tax reform. 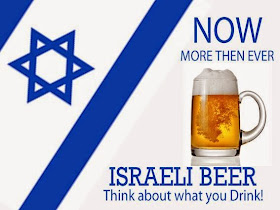 Unger, 51, is passionately devoted to his work as a youth counselor. He is married and has, as he says, "one son of my own and about 50 kids who aren't." He came to Israel 21 years ago via Toronto and Los Angeles for a three-and-a-half week visit, and stayed. His brewing partner Betzalel was one of the kids he met in Beit Shemesh a few years ago.

Unger has in the meantime purchased new brewing equipment so they can double their weekly output of beer. He is also preparing the position paper which Lipman requested.

We can only hope that it will make a difference, and that micro-brewers in Israel will soon be able to make their beers without a useless tax crushing them down. Stay tuned. I plan to keep up on this.