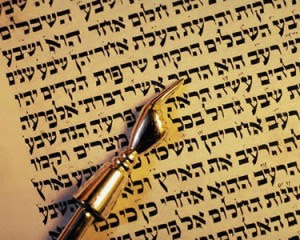 On Shabbat Bereishit (Genesis) my rabbi, Rav Chaim Soloveichik, recommended that congregants strive to be more meticulous in reading the parsha and targum/translation during the week before, so they will be adequately prepared for the public reading on shabbat.

The first time I generally read through the weekly parsha (weekly Torah reading) is on a shabbat morning, along with the reader as he reads it publicly from the Torah scroll.

I will therefore be attempting to read the parsha before shabbat, and write up my thoughts to share with you on this blog.

This will be on a best-efforts basis (bli neder! no promises!).
------
To get the ball rolling, I will go back to Parsha Bereshit itself, (with a hat-tip to my friend Eric Rosen).

I will take a fresh look at the most famous and first Rashi on the Torah, on the first verse of Bereshit/Genesis "In the beginning, God created heaven and earth . . .".

Rabbi Yitzhak says: "The Torah should have started from the verse in Exodus, 'This month shall be your first month' (xii:2), which is the first commandment given to the people of Israel. Why, then, does the Torah open with 'In the beginning, God created heaven and earth . . .'?" The reason is that "God revealed to His people His glorious creation so that they could receive their rightful inheritance from the nations of the earth." (Psalms cxi:6) In other words, should the nations of the world accuse the Jewish people of being robbers who have unlawfully taken the Land of Canaan from the seven nations (native to that land), the Jewish people can respond: 'The entire world belongs to God. He created it and He has distributed portions of it in accordance with His plan. Just as He exercised His authority in granting the Land of Canaan to the seven nations, He exercised that authority in granting the Holy Land to us.

Rashi is stating that the purpose of the whole of the book of Genesis, and the first section of Exodus, which do not include commandments for the Jewish people, is to provide us with a justification to the gentiles for the the Jews occupying the Land of Israel.

We are not robbers, whole stole the land from the Canaanites, but rather the Land of Israel belonged to God, who gave it over to the Jews.

This is a fine argument, but who's listening?

The Romans were not interested in whether God had given the Jews the Land of Israel.

The Crusaders did indeed believe in God, and in the Old Testament, including Genesis.

Whereas the Crusading Christians fully accepted that God had given Israel to the Jews, during the time of Joshua, any Jewish claims to the Land during the Crusader period were irrelevant.

The Land of Israel was being passionately and bloodily fought over between Crusading Christians and Muslims.

The Jews were a (viciously persecuted) side-show.

So who was Genesis and the first part of Exodus written for, if its primary purpose (as Rashi states) was to present the case for the legitimacy of Jewish sovereignty of the Holy Land, on the grounds that God had taken it from the gentiles and given the land to the Jews?

There is only one moment in history, that believing Christians needed to be persuaded of the fundamental legitimate rights of the Jews to have the Land of Israel.

That one moment was on 29th November,1947, as the nations of the world gathered at the UN to vote on the Partition Plan for Palestine.

The debate was essentially between the Muslims and the Christians.

The argument of the Arabs, against the motion, was "from a survey of Palestine history, that Zionist claims to that country had no legal or moral basis".

In Rashi's words,the Arabs "accused the Jewish people of being robbers who have unlawfully taken the Land of Canaan".

In the final vote, 33 counties, or 72% of the vote, ALL of which were Christian origin countries, voted in favour of the establishment of the Jewish State in Palestine.

Venezuela
Western European and Others (12 countries):

The UN Vote on Palestine of 29th November 1947, was the crucial moment in history that the nations of the world accepted that the Jewish people had a valid legal and ethical claim to the Land of Israel.

Their source was the Bible, and the book of Genesis in particular.