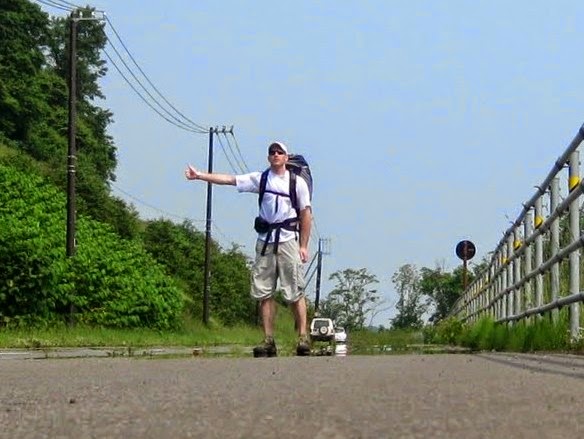 Along with saying tehillim, davening, and showing solidarity with the three boys who have been kidnapped & their families, there is not much practical for regular Israelis to do during this appalling nightmare.

Meantime, the media is stretching every angle for topics to discuss. Some of it is fluff. Others include analysis and commentary.

One of the topics is hitch-hiking.

After all, the three kidnapped boys were captured while thumbing a ride home from their yeshivas (in Kfar Etzion and Hebron) to their homes.

Some of the discussions seem to even criticise the boys for hitch-hiking, and perhaps their parents for letting them, which is frankly in very bad taste; even if in other parts of Israel, hitch-hiking could be considered impractical or foolhardy - the fact is that, with almost no regular public transport services to and from these settlements & villages, hitching or "tremping" for those without their own cars, such as these teenagers, is a way of life.

With each of my own children, except my youngest (his time will come), we have thrashed out the issue of hitch-hiking.

Their friends and hobbies regularly take them to small or remote places, where they have no other travel option except hitch-hiking.

I am on thin ice to be very strict with my kids about hitch-hiking, as I spent many happy months myself, during my teens and student years, hitch-hiking around the world. My kids have heard some of my travel stories about hitch-hiking in Czechoslovakia, Hungary (during the Soviet days), criss-crossing Europe & Israel, and even in West Africa & trans-versing the Sahara.

Lest you say things were different in those days - they were not, as far as hitching-hiking was concerned. It was considered a risky enterprise even then, and my parents must have had sleepless nights.

Some basic safety rules are:

1.  Always sms/text to your parent/friend where you are and where your going, regularly, with updates about significant delays.

2. girls/women, if at all, should only hitch-hike in pairs; wherever practical boys should do also (the downside is it slows down the journey, as less people have space for two than they do for one passenger).

3. the hitch-hiker should ask the driver where he's going, not vice versa (which gives the hitch-hiker an opportunity to look the 'host' over; if he doesn't like what he sees, he simply says - "thanks, but that's not where I'm heading", or suchlike);

4. day-time is much better than night - so aim to arrive at your destination well before dark;

5. never be afraid to say, "please stop over there, I need to get out" (eg if the driver is reckless - statistically a far more dangerous problem than criminals);

6. A couple or a woman driver are safer to get rides with than solo or (worse) multiple guys.

8. to protect your stuff, if it is separate from you during the journey, when you get out of the car, open your door, keep it open, while you open the second door to retrieve the bag. Only then close both doors. This avoids the driver moving off with your stuff, intentionally or otherwise.

You should note that the three boys, Naftali, Gilad and Eyal would seem to have kept to safety rules - and even contacted the police when they realised their situation.

Let's not fool ourselves, the real issue here isn't hitchhiking, it's terrorists.