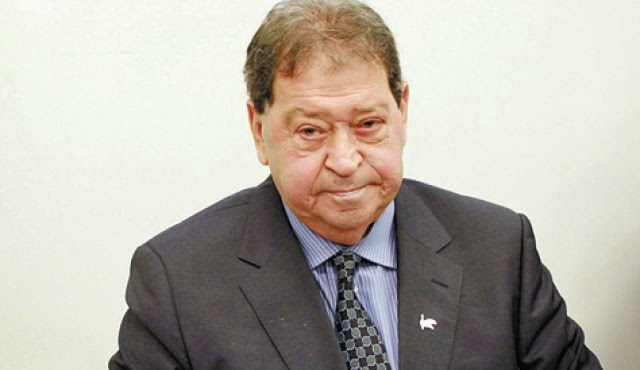 When he was first elected an MK, Natan Sharansky quipped that he is unique in Israeli politics, in that Sharansky went to prison BEFORE he came to the Knesset.

The discovery of $600,000 cash in Presidential candidate Binyamin Faud Ben Eliezer's personal bank box, on top of the revelation that he received some $500,000 "loan" from billionaire Avraham Nanikashvil, has resulted in Ben Eliezer withdrawing his candidacy under a cloud.

Scandal-battered Israelis are getting used to this.

With the star-studded Holyland bribery scandal still in the headlines (ex-mayor of Jerusalem Uri Lupoliansky was facing sentencing today - postponed due to his ill health), memories of the imprisonment of previous President Moshe Katsav (for rape), and the resignation of another presidential candidate in this election Shilvan Shalom (allegations of sexual misdemeanors, which were beyond the statute of limitations) this adds up to a run of criminal and shameful behaviour from our erstwhile most respectable leadership.

Those with longer memories will recall President Ezer Weizman's resignation in disgrace, after revelations of financial shenanigans (which were also past the statute of limitations).

All in all, Israel's convicted criminals include

I suggest that one of the reasons that some Israeli politicians are tempted into crime, is their low government salaries.

These salaries are in line with a bank branch manager or a manager in a small company.

According to the business newspaper Globes: The annual salary of the CEO of a company traded on the Tel Aviv Stock Exchange is now NIS 3.5 million (about a million dollars).

Which is to say, over 8 times as much as Israel's political leadership.

Remember that senior politicians are responsible for multi-billion shekel budgets of public money. Their influence can sway huge commercial decisions this way or that.

Senior politicians rub shoulders with other VIPS, such as other politicians, heads of state, Popes, etc, or Very Wealthy People (VWP).  We regular folks don't get a look in.

The huge gulf between politicians' salaries and the standard of living of these VWPs leaves the politicians very prone to envy and temptation.

Olmert and his crowd of crooked cronies were found guilty of accepting bribes in return for building permits. These transfers were typically measured in 100,000's of NIS.

Profits on Government contracts can run into the tens or even hundreds of millions - so buying a positive result for a few 100K is a bargain.

Consider other respectable world leaders, such as Arafat, Mubarak, Gadaffi...who allegedly creamed off literally Billions of dollars of public funds into their personal off-shore bank accounts.

They charged a reasonable rate for their corrupt services.

For a few hundred K, those esteemed statesman wouldn't have blown their nose. Never mind award a contract or give a mega-bucks building or oil drilling licence.

Any politician who is solely motivated by money, should not be serving in a position of influence over public funds.

However, it is apparently unrealistic to expect today's politicians to be satisfied with the humble living standards of David Ben Gurion, Golda Meir or Menachem Begin.

In order to reduce the likelihood of corruption, I vote we give MK's & Ministers several times their current salaries - to bring them into line with realistic salaries in the commercial world.